The Wolf of Wall Street 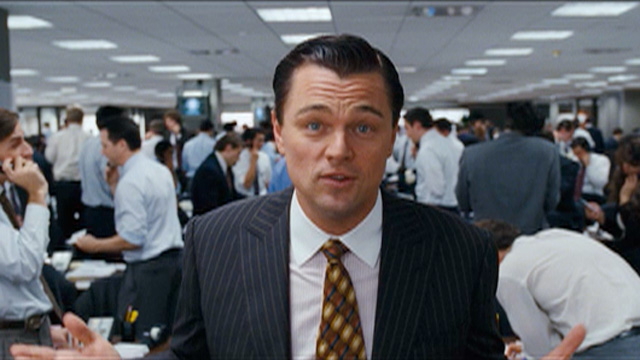 
A lot of cinematic verve and energy are on display in this fifth collaboration between Martin Scorsese and Leonardo DiCaprio, chronicling the excesses of 1980s stockbrokers.

DiCaprio goes for broke in a wild turn that outdoes his Calvin Candie last for Quentin Tarantino in his wicked western Django Unchained as the very ambitious Jordan Belfort only 21 when he got his Wall Street position (actually for the Rothschild firm). Here, from Belfort's memoir as adapted by Terence Winter there are farcical elements blended into tragic and comedy to let the seismic shifts of power and relationships develop. It runs in breakneck fashion though the bravura, go-for-broke style gets a little winded in the latter going though not for letting a shimmering looking overlong tale from savvy designs and pulse-pounding editing (even outdoing Scorsese's The Color of Money) with nary moral relativism blaze away with inventive craziness.

Hanna tutors the high-energy fellow in ways that help him become a multimillionaire in co-opting a hedonism with an exhausting work ethic. After the stock market plunge in 1987 Jordan will start his own firm with the quirky Donnie, a spitfire Hill with dental inserts and dissolve his marriage to his wife (a sweet Cristin Milioti) getting a new one, a voluptuous model (a bombshell in Robbie). Her British aunt (Joanna Lumley) is involved in maneuvering his large sums of cash through a Swiss banker (Dujardin of The Artist). However, a straight-shooter of an FBI agent (Chandler) begins to be in on the scam as Belfort would finally pay for securities fraud and money laundering.

A hardly introspective DiCaprio wills his way into an empowering tour-de-force that plunges one into Scorsese's mindset to deliver a series of knockout blows through some luxuriant set-pieces with plenty of narration by Belfort (though not as good as Ray Liotta in Scorsese's winning Goodfellas). There are plenty of vile characters around as Hill charges right with DiCaprio in edgy fashion. McConaughey is sharp in what amounts to a cameo, and Lumley and Dujardin illuminate their scenes.

In irreverent, often hilarious fashion with some striking moments whether a brawl between Jordan and Donnie or a ship at sea, Scorsese and Winter aren't creating a cautionary tale or parable if one reads into this sordid depiction of sheer force that is entertaining and playful.