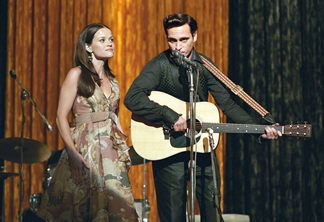 
"Hello, I'm Johnny Cash." These words sure sound like the late legend and with your eyes closed, it appears to really be him.

Open them and Joaquin Phoenix looks like the broad and tall country star whose life and muse make Walk The Line.

Following the eerily booming bass of "Folsom Prison Blues" sets this story in motion, Cash's 15 year musical repertoire through the 60s is played out by Phoenix, who captures the spirit and essence of the man and his music.

Of course, by the time that June appears, Cash has already lost a brother, butted heads with a domineering dad (Robert Patrick), married his Arkansas sweetheart (Gennifer Goodwin) and failed as a salesman.

It seems fate destined Cash to walk into the famed Memphis recording studio where Sun Records honcho Sam Phillips (Dallas Roberts) started turning the man from gospel singer to the legendary "Man In Black," one of two Cash biographies on which the screenplay is based.

June arrives in Cash's life just in time to see him drawn into the dark bowels of show business. It gives her the opportunity to display the calming influence of a woman behind a man on a path of self destruction and then, beyond that, greatness.

The soundtrack and delivery by both stars is nothing short of astounding. Combine this with a superb screen play, both stars delivering both inspired and yet emotionally disturbing performances and this film should be an Oscar nominee and perhaps a winner.