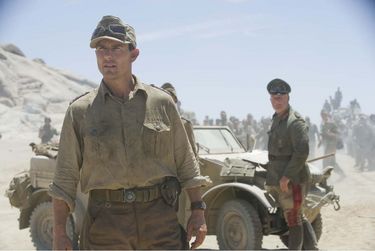 
Valkyrie is a dubious holiday release and another failed chance to re-energize the star image of Tom Cruise.

Not that Cruise is intense and focused as the dashing Col. Claus von Stauffenberg in Bryan Singer's thriller set mostly in 1943 and 1944.

This takeoff on films like Day of the Jackal revolves around one of the many failed assassination attempts on Adolf Hitler as more than a few military men found Nazism to be a "stain" on Germany's army. This one was one not easily picked up on. One hardly has to worry much about subtitles (after an early interlude with Stauffenberg) with the main quartet of English actors around Cruise.

Singer (X-Men and Superman Returns) is back with writer Christopher McQuarrie (also co-producing with Singer) after The Usual Suspects to inject the notion of "change" in a country's leadership that is topical. Unhappily, in depicting those who dared to take down "evil", the characters and dialogue aren't as inviting as the design and location work to strongly realize a sense of place when Germany started to lose its grip on Europe and the Soviet Union.

During a tour of duty in Tunisia, Stauffenberg is badly wounded during an air raid leaving him without his right arm, left eye, and last two left fingers. With a prosthetic arm and black eye patch, his national salute may seem a tad subversive, and he begins to surround himself with those who don't want Germany to turn out like the Soviet Union.

Many are older types who are more conservative in nature, adhering more to the ideologies of the Kaiser. Included are Kenneth Branaugh's Maj-Gen. von Tresckow, Bill Nighy's Gen. Frederich Olbricht, Terence Stamp's Gen. Ludwig Beck, and the East Prussia "Wolf's Lair" communications head Gen. Erich Fellgiebel (Eddie Izzard). An important figure in having the documentation go through on the titular coup activating power to the reserve army in a state of emergency is its commander-in-chief, Gen. Frederich Fromm, acted with enigmatic authority and loyalty to the Reich by Tom Wilkinson.

A good part of the proceedings which will appeal most to World War II history buffs seems to be kept on simmer, as Singer doesn't try to oversimplify this ambitiousness and the trickiness for Staffenberg to make it all work and be on his way for governmental control in Berlin.

From the bomb's detonation and Stauffenberg's swift exit, the overrall pulse begins to quicken. One of the best scenes in Valkyrie is when reports of the Fuhrer being dead seem to have come to fruition as female operators start to raise their hands when communication lines have been cleared.

A turnabout will occur after the reserve army has retained the SS, even with the conspirators led by a steadfast Stauffenberg holding onto to a thread once learning Hitler, a fairly convincing if little-seen David Bamber, has survived the blast.

Perhaps if McQuarrie and co-author Gilbert Adler had filled the characters with more personality and depth, the implications of the story would have been more deeply felt. Maybe Cruise doesn't quite loosen up in the role like he did as similarly flawed, but respectable officer in The Last Samurai as Staffenberg tries to make contact with his wife Nina (an underused Carice van Houten of Black Book). Besides the hearty support of Wilkinson, the impressive casting includes Thomas Kretschmann as the under-the-gun Maj. Remer of the reserve army.

Yet, the effect of character and story pale when it comes to how Singer works with his crew in staging scenes at the aforementioned Wolf's Lair, War Ministry, and the Benderblock (where the executions were held). Even in the aerial sequences with the German aircraft, much is rewarding in period verisimilitude, with subtle gracefulness in sound, editing, and cinematography.

But, even besides the dialogue which can be off-putting from the English voices, probably more so than Cruise (like Enemy at the Gates), Valkyrie just isn't as fascinating as it's impressively made out to be. For those looking for something more interesting surrounding this conspiracy, seek out the German small-screen production of Stauffenberg starring Sebastian Koch, also in Black Book.