Two for the Money 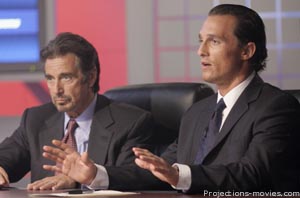 
Director D.J. Caruso (Taking Lives) gets a little perverse with the world of sports betting in Two for the Money, which stars Al Pacino and Matthew McConaughey.

From the psychedelic to the serial killer genre, Caruso knows how to generate manic energy on the screen. But, with high stakes betting operating on the roughly the same wavelength as Pacino's The Devil's Advocate, the unscrupulous scheming hardly proves exciting.

With the NFL and College contests in full swing, the father-son stuff gets off on handicapping gridiron games at 1-900 numbers. The studly McConaughey, better in Sahara, as Brandon Lang, is quite good at selecting winners from his native Las Vegas. Once a star in the making, Brandon's career was stopped due to a college injury, but seems to be on the verge of the big time once approached by Pacino's Walter Abrams. Abrams is the hot-shot in charge of a New York City betting consulting firm.

Thus, the plot unwinds with similarity to the aforementioned Advocate and The Recruit, also starring Pacino. Abrams bargains with Brandon to adopt a new identity as John Anthony, looking like the dapper, brawnier version of Charlie Sheen in Wall Street.

Abrams looks to ride his protege's uncanny winning streak all the way to the top, but the wanton scheming gets the better of all involved, and the film itself. It sometimes has its perks as an insider into an extremely lucrative enterprise and wants to touch on the paternal relationship, with Brandon left behind as a child by an alcoholic dad. Caruso infuses a passion for the simulated games and those watching them as the visuals build from the corruption and hype at the core of the material.

The new image of a man for John Anthony is Walter who sets him up in a swank Brooklyn apartment. The screenplay by Dan Gilroy gets more out-of-bounds as Pacino chews up more scenery, and a love triangle between Walter, Brandon, and Walter's drug-addled, if recovering wife Toni, a pretty good Rene Russo, unfolds.

Armand Assante appears in the part of a Puerto Rican client as another of those swindled out of their cash who'll vent out in an unsavory park scene. The film perhaps works best as a cautionary tale on gambling given probably the most insightful, amusing scene at a meeting. Yet, there is fleeting ecstacy for audiences thinking this mentor movie has grace and might. Jeremy Piven and Jaime King try to make good impressions as a bitter rival and a girlfriend, but it's Pacino being as despicably antic as once he was a maliciously suave legal figurehead that keeps Two from not being completely unworthy of one's hard-earned money.