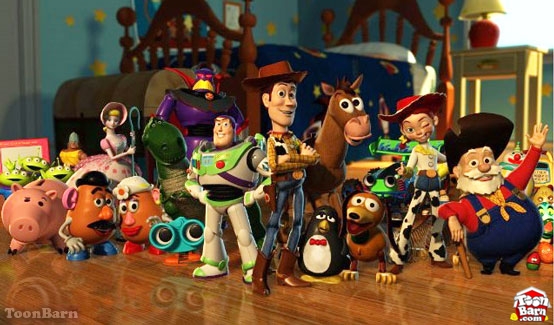 Tom Hanks and Tim Allen lead the voice talents in a delightful second adventure for the cowboy, Woody, space man, Buzz Lightyear and the other toys in Andy's (voice of John Morris) room.

We learn in this episode that Woody is a valuable collectable from a 1950's TV show called Woody's Roundup.  Collector Al McWhiggins (voice of Wayne Knight) ruthlessly steals Woody and matches him up with other collectibles from Woody's Roundup, Jessie (voice of Joan Cusack) and Stinky Pete (voice of Kelsey Grammar).  Buzz Lightyear leads Woody's toy friends on an adventure to free the captured cowboy from Al's Toy Barn before he and the other collectibles are shipped to Japan for big bucks.

Featuring an excellent script, great characters and a few surprises, Toy Story 2 is one of the best films for the holiday season.  It is one parents will enjoy along with the kids.

The characters use a toy computer to discover the location of Woody after he is kidnaped, they must cross major highways in creative spectacular ways, deal with an arch enemy, the evil Zurg, and hundreds of new Buzz Lightyears who have no experience in the world.  They will fight Stinky Pete's determination to get out of his box and Jessie's determination not to go back into her original box.  It all comes together in one delightful story of loyalty to friends and the value of love over image.

This one is worth seeing more than once.