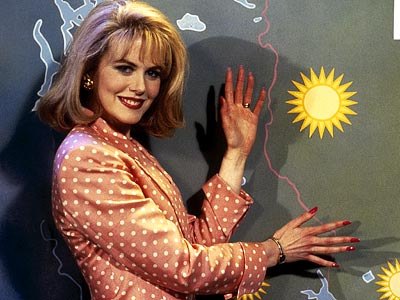 
The script by Buck Henry is clever, the performances and casting are right on the mark. Season of the Witch is the music over the ending credits. It's a perfect summary of the film.

In my review of Malice, I stated that Nicole Kidman lacked the range to pull off the dual personality role. I take it back, her performance in this role as Suzanne Stone, who is willing To Die For television fame is cold, chilling, and twisted enough to be comical.

Matt Dillon is the perfect foil as the husband who would be content with a wife and a family. His Mr. Average performance serves to enlarge and exaggerate Kidman's work. An outstanding performance is given by Joaquin Phoenix and Jimmy Emmett, the young unsophisticated teen who is seduced into murdering the husband who gets in the way.

Director Gus Van Sant uses unconventional devices to tell the story. Much of it is told directly to the camera and on television tape in documentary style. Kidman's character makes her decision to do away with her husband during a late night confrontation. Van Sant's camera is aimed at Dillon from her point of view, her mental focus on him is reflected on the screen in a circle surrounded by black like the view from the alien's eye in the fifties science fiction classic It Came from Outer Space while Outer Limits music fills the sound track.

Kidman is never without her clothes but she is sexy and seductive in every scene. Her image and monotone delivery directly into the camera show the perverted twists of Suzanne Stone's character. Her image is riveting and lasting.
She might be To Die For. This is a great performance.