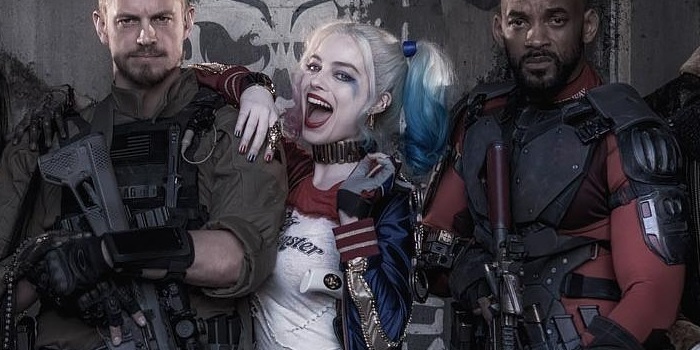 
Freaky death row villainous sorts are made out to be limp and less than irresistible in a vapid DC Comics movie set not long after the gloomy Batman v. Superman.

A couple of appearances for the Caped Crusader in a banal, too much of this, too little of that Suicide Squad ham-fistedly directed by studio-corralled David Ayer (writer of Training Day, Fury, End of Watch).

He doesn't do for this genre like the cop or war drama trying to make more than a muddle of "the worst of the worst", meta-humans recruited to battle those more 'evil' than them at least a couple, a blazing distaff possessed figure and a tentacle-spewing armored giant that augments the sad disappointment for restive aficionados.

Mentioning the Dirty 'half' Dozen of different characters from the DC universe should have inspired a more coherent lunatic fringe instead of a prolonged buildup to putting them into action. Some start out decently like Jai Courtney's Boomerang, but scaly Killer Croc (Adewale Akinnouye-Agbaje), Jay Hernandez's conscience-stricken Diablo and especially Adam Beach's rope maven Slipknot really struggle to command attention; as in the case of Killer Croc the attributes constitute the acting.

From the marketing the two characters who are suppose to amuse and tickle the target demographic the most are heartless assassin Deadshot, done by Will Smith a little in Fresh Prince mode (with some hard-boiled pizzazz) when speaking to sadistic guards having a soft spot for a daughter deserving of an Ivy League education. As well as his amazingly sculpted, scantily-clad Focus co-star Margot Robbie (also of the recent Whiskey Tango Foxtrot) as the delightfully deranged Dr. Harley Quinn, lethal with a mallet, bat or custom-made revolver. Harley gets a little mushy, though, in the presence of the green-haired, steely-toothed Joker, a cackling Jared Leto, providing an oddly-styled menace in his limited screen time.

Dr. Jane Moone/Enchantress, as portrayed by Cara Delevingne, is a bummer that bogs the proceedings being the love interest of trouble Navy Seal trying to keep our super villains in line Col. Rick Flagg (Joel Kinnaman of Safe House and Robocop). Flagg's chief underling with ninja flash (Karen Fukuhara) can't do much also on 'good' side; perhaps ruthless bureaucratic agent Amanda Waller wields the most malevolence in assembling these wicked miscreants, but even Viola Davis here in this enervating endeavor probably wishes she were back on the set of The Help.

It's safe to say that this Squad has more than its share of clichéd tendencies, not from the overwhelming meanies, that is to DC what Fantastic Four is to Marvel and that might be kind. Some avid supporters of what is too candy or sugar-coated for Ayer will want stand-alone features for Deadshot and pony-tailed Harley, but the result is the kind of costly suicidal nadir which could necessitate bigwigs to show a little more creativity at the drawing board.