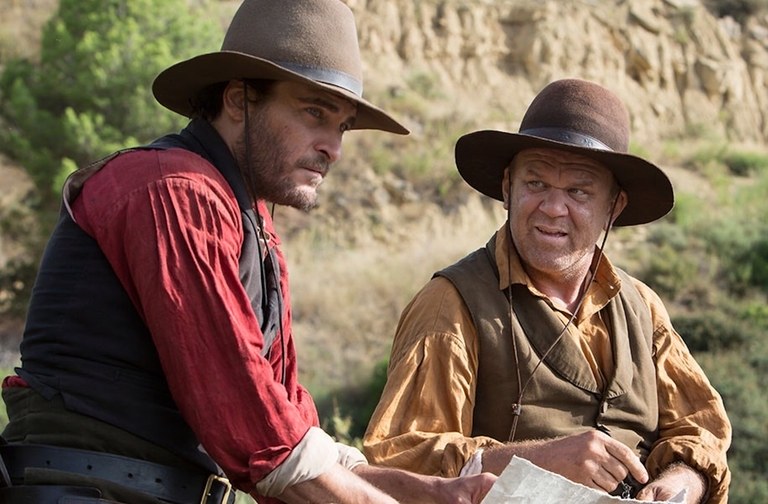 The Sisters Brothers features John C. Reilly, Joaquim Phoenix, Jake Gyllenhaal, and Riz Ahmed and is set in 1851 with the California Gold Rush and its lure as the backdrop.

Reilly and Phoenix are well-paired as the titular contract-killing siblings, Eli and Charlie, who are retained by The Commodore (Rutger Hauer, seen but not heard) to eliminate Middle-Eastern chemist Hermann Warm (British-born Pakistani actor Ahmed, much in-demand currently). The boss has an erudite, prissy detective John Morris (Gyllenhaal, who excelled in the edgy thriller Nightcrawler opposite Ahmed, an Emmy winner for HBO's The Night Of) ahead of them to scout the man who's developed an illuminating secret formula regarding the precious, valuable element.

But, Audiard excels in moving the genre in a different route that may be trying at times with a climax that appears to be endless. But, how he parlays the characters through a milieu filled with brutality, betrayal, and unity is strangely mesmerizing. Mostly because of the way the actors reflect his unique vision with polished production values — from another creative Alexandre Desplat score to the naturalistic photography (shot in Spain and Romania) filling in for the varying climates and topography of Oregon to the Golden State. Though the nocturnal scenes sometimes are so authentic so as to have trouble making out some of the action while possibly some suspense.

Reilly is involved in the producing end of four country collaboration and his Eli is the most interesting looking for something else than the business, and the lingering hostility between him and Charlie are quite palpable with wacky overtones. The versatile actor even has good moments with a prostitute, well-played by Allison Tolman. Carol Kane lends support as the Sisters' aging mom. And, Phoenix brings reckless mischief and menace to Charlie. How the principal quartet relate in pairs and as a whole adds to the chameleon nature and insights. Audiard should also be commended for the staging of many of the visceral sequences, although the most graphic is of a dire medical concern definitely not for the faint of heart.