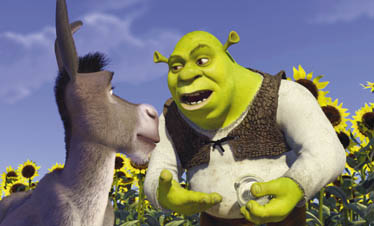 Eddie Murphy is a Jackass, Mike Myers an Ogre, Cameron Diaz a beautiful Princess and John Lithgow is the conceited Lord of the Realm.  Sound like a description of the actors in real life, maybe, but in here it is their alter animated egos in Shrek.

The story of Shrek is basically a Beauty and the Beast with a few great twists and turns, and the added bonus of a story that will delight both adult and child.  Contained within this story is a myriad of famous faces, including the famous Mirror on the Wall, Snow White, the Big Bad Wolf , Three Little Pigs and the Three Blind Mice.  You will enjoy the appearances of many more as well.

As for the story, our unsuspecting hero is Shrek (voice by Mike Myers) a large green and ugly to the point of being adorable ogre.  Shrek enjoys his life in his swamp until an army decides to rid the landscape of all fairy tale creatures and relocate them to his domain.  This influx of creatures causes Shrek and his new friend Donkey (voiced by Eddie Murphy) to visit the court of Lord Farquaad (voiced by John Lithgow).  Here Shrek makes the deal to save the love of the Lord, Princess Fiona (voiced by Cameron Diaz) from her captor, an evil Dragon, and in return get his swamp rid of all the new arrivals. The feelings that develop between Shrek and the Princess are something neither Lord Farquaad nor Shrek envisioned.

Fortunately, the script is wonderfully written and provides a story and laughs for all ages.  Some of the lines will go over the younger viewers heads, like " With a castle that big, he has to be compensating for something" will elicit roars from the adults while not alienating the kids and visually amaze the young and the old.

Of course the heart of each character is provided by the voice - and Myers, Murphy, Lithgow and Diaz pour their souls into their delivery.  At the same time the quality of the animation makes you forget you are watching characters and not humans.  Even Donkey is so real that you soon forget that animals don't talk.  Watch this film carefully and you will notice the near perfection that Dreamworks Studios delivers, from correct shadows, to muscle tone, individual hair, milk that looks good enough to drink and grass that when passed through looks like a field just crossed and its blades crushed by the feet upon it.

Finally Hollywood delivers a new classic with the assistance of all the computer equipment available today.  Be assured that the expected happy ending is served, but with a nice twist.  Look out Lucas Films, Disney and Industrial Light and Magic, there is a new leader in town and he's called Dreamworks and he is not taking any prisoners.  After the applause dies down and you exit the theater, you may find yourself wondering, as I did, how long it will be before actors are nothing more than the voice and the computer magicians deliver the bodies for the big screen, as this is that good.

In summary, fun, frolic and fantasy are guaranteed while kids of all ages and adults will enjoy what is truly this year's best film to date and the best animated story since Fantasia.