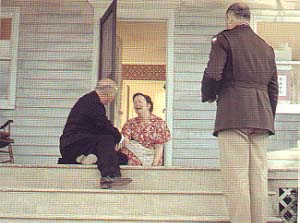 Watching Steven Spielberg's new film about World War II is quite an experience.  It has one of the longest, brutally violent scenes I've ever witnessed.  Lasting 24 minutes, the sequence doesn't end until bloodied bodies cover Omaha Beach on D-Day, as far as the eye can see.

Back home, a secretary discovers that three Ryan brothers have been killed in action and their mother will be receiving their death notices on the same day.  A younger fourth brother is fighting somewhere in France and the Army brass wants him found and sent home as soon as possible.

After surviving the horror of D-Day, a battle-worn captain (played beautifully by Tom Hanks) is ordered to select a small group of soldiers and find Pvt. James Francis Ryan (Matt Damon).

The eight man squad is comprised of real personalities.  A teenage interpreter with no combat training, a gung-ho sergeant and a sharp shooter who quotes the bible while taking aim, are some of the well-rounded interesting characters.

Hanks' character keeps his home life separate from his military objective.  Keeping the details of his prior existence private is his only way of saving those cherished memories.

These men are heroic, flawed and complex.  You feel their fear and uncertainly in every closeup.

Spielberg had the foresight to have the actors who comprised Hanks' squad go through a tough two-week Army basic training, while Damon was housed in a comfortable hotel.  This simple ploy had the actors resenting Damon, which is exactly the emotion the director wanted from this group of men who risked their lives searching for one soldier.

Remarkable in its realism, Spielberg himself warns that his film is not for children under 15.  Each battle is vividly photographed and graphically gory.  Limbs and body parts are blown off with regularity and it is often difficult to continue watching without turning away.

Hanks once again proves that he's one of the best Hollywood has to offer.

Saving Private Ryan is a moving, frank and devastating look at a terrible war.  It's sure to be singled out next year for its outstanding achievements.

It is rated R for obscenities and graphic violence.