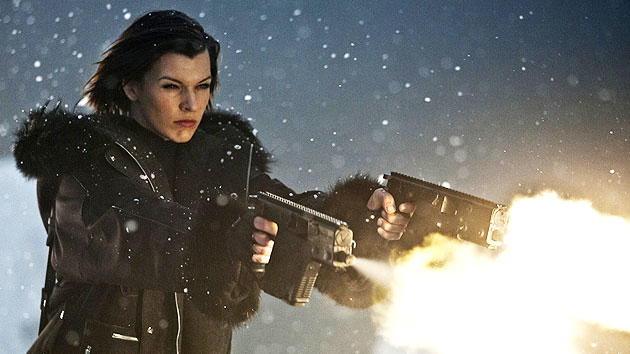 
Director Paul Anderson has said this is the end of Resident Evil films.  It's time for it to end.

Back in March of 2002 the series began with the simple title of "Resident Evil"  It had an interesting opening in which the Red Queen the supercomputer that controls and monitors the Hive sensing a danger in the spill of a vial of dangerous chemicals locks down the facility and kills all of the employees.

In this episode Alice (Milla Jovovich) once again is leading a small group who are considered the last survivors who will make a final stand against the undead and the Umbrella Corporation.  She heads back to the Hive in Raccoon City where the Corporation is preparing to release the last of the chemical fluids that will kill everyone and make a new start with a special few humans.  The World is no longer able to provide food and water for the many human occupants of the planet, and the Umbrella Corporation is thinking like Scrooge from A Christmas Carol wants to eliminate the surplus population.

The first half of the film is filled with battles blurted across the screen as the last stand humans head toward the Hive to prevent the release of the blue green liquid.  The battles appear to be violent and vigorously fought, but Director Anderson chooses to move the camera quickly around in and out of the killing and escaping scenes, not much is clear to view it just jumps around with the apparent goal of as much action as possible with little description or dialogue to explain the motivations.

We are therefore captives watching what is a repetition of the same action over and over again for nearly an hour.  As Alice and the few who remain enter the outer edges of the Hive, they begin to be confronted with barriers before they can reach the control area where communication with the Red Queen can occur and where Alice comes in contact with Alicia Marcus also played by Milla Jovovich.

In the most interesting segments of the film the Red Queen, Alice and Alicia Marcus communicate and reveal the remaining secrets and plans of Dr. Isaacs (Iain Glen) who has the most sinister secret to reveal.

As the undead descend toward the Hive, the Red Queen, who is clearly the best character in the script begins to explain the next step and her purpose in this dark ugly world that the Earth has become. How anyone can survive the T-virus is the final revelation just after we watch the undead attack and face a new danger to themselves.

I have not been impressed with any of the Resident Evil films, and this is probably the least interesting and least well written of the lot.