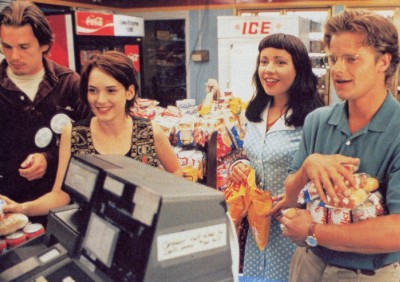 
Some people have been comparing this film to The Graduate. Remember Dustin Hoffman as the grad with no direction in his life? Well, Reality Bites goes in so many different directions, it's difficult to label.

Winona Ryder plays Lelaina, a recent college graduate who works as a researcher for an egotistical TV talk show host (John Mahoney). She rooms with Vicki (Janeane Garufalo) who's proud of her job as store manager at The Gap, a job that Lelaina thinks is beneath her.

Tension is added to their small apartment life when Troy (Ethan Hawke) moves in. He's a periodically employed guitarist and his lack of drive and commitment bugs Lelaina no end.

The roommates sit around swigging beer, slurping Big Gulps and discussing the meaning of life while smoking anything they can get their hands on. There's so much cigarette puffing going on here, I expected Joe Camel to sashay across the screen at any minute. They talk in quick, unfinished sentences, fret about whether to "evolve" with someone, and one of them has casual sex and then worries until she gets her AIDS test results...really deep stuff.

Lelaina is making a documentary of her friends and herself as they struggle on, so quite a bit is done in that shaky, in-your-face, hand-held manner, which is very annoying.

The actors are all capable, good young performers, but the characters are so irresponsible, especially Hawke, who sits around watching TV and spouting one-liners. They are hard to really care about.

Ben Stiller, who directed and costars as Winona's yuppie boyfriend, does get marks for trying something different. Since this movie is aimed at twenty-somethings, maybe I'm too old to appreciate its merits. As I see it, it was much ado about nothing.