The Place Beyond the Pines 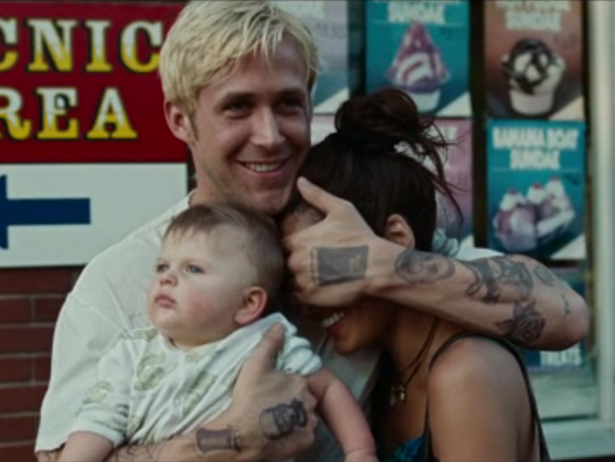 
Derek Cianfrance's latest opus is a sprawling, diffuse tale that just can't manage to equal the raw intimacy and moody rhythms of his Blue Valentine even in collaborating again with lead actor Ryan Gosling.

That's not to say his ambition in working from a triptych structure to create a poignant parable is for naught in the Gosling/Bradley Cooper starrer The Place Beyond The Pines. Some will grab onto the themes of recurring violence and fatherly sins in a film which gets its name from the Iroquois name of Schenectady, NY and has its more riveting moments in the earlygoing where Gosling's Luke, a tattooed handsome stunt cyclist in a traveling circus turns to a life of crime.

The filmmaking establishes a viable sense of time and place in spite of a valiant purpose to meet the demands of the narrative as the score by Mike Patton provides a certain distinguished hypnotic allure. As Luke's life is entangled with Cooper's rookie cop with higher aspirations, the latter character gains prominence in ways the movie and his own struggle with a morally diminished society play out. Later, there are a pair of high school students - done by Emory Cohen and Dane Deltaan that echoes at least in the latter of introspective woebegone.

Elements of The Place have the ability to display much to keep us in its grip notably in Gosling's scenes with Eva Mendes's Romina, an ex and mother of his child whom he's impelled to support; a subplot of amiable mechanic accomplise played by Ben Mendlesohn (Animal Kingdom) even has more potential than delivered here but has to succumb to Avery's plight which almost seems to much of a halcyon. Yet, if Cooper doesn't nearly rise to level of talents projected so well and naturally opposite the likes of Jennifer Lawrence and Robert DeNiro in Silver Linings Playbook there's something to be said to the actor's commitment to a difficult, but key linking, transitional role. While effective support comes from Bruce Greenwood and Harris Yulin (Avery's attorney dad) more of the routine or diminished comes by way of Ray Liotta's iniquitous cop or Rose Byrne's wife.

And, as the final reel does attempt some successful dividends in confronting character and thematic concerns it just doesn't resonate like Cianfrance's non-linear gritty look at marital discord. It just doesn't maneuver like a mighty intended melodrama like Mystic River did in dealing with rippling generational trauma or alternate with to surprising visceral and emotional effect like Gosling did with an arguably akin character in Drive.