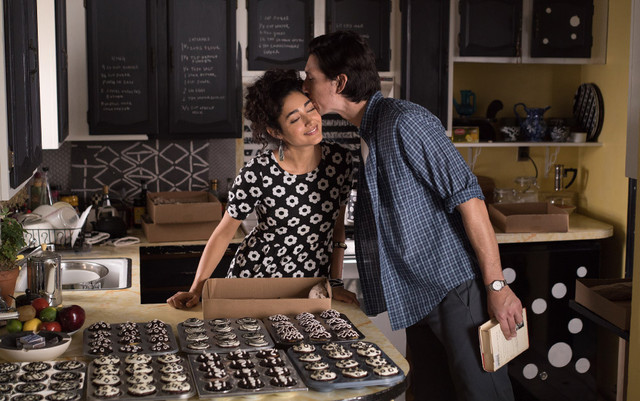 
Independent auteur Jim Jarmusch has worked with many acclaimed actors, including Johnny Depp, Forest Whitaker, Bill Murray and Tilda Swinton. And, in an episodic Paterson gets much out of the in-demand Adam Driver (Silence, Midnight Special, Inside Llewyn Davis).

The lanky talent has the same name as the Garden State City in which he dwells, ferrying around and listening to folks as a bus-driver. Also, he's a wannabe poet (as his idol William Carlos Williams, Allen Ginsberg, and Lou Costello have resided there also) producing verse from his daily routine. What turns out to be weirdly interesting, especially for supporters of the eclectic writer/director who's made unadorned distinctive features like Mystery Train, Night & Day, Coffee & Cigarettes, and Only Lovers Left Alive among his varied output.

An affectionate rendering of inspiration which happens when a day goes fairly well, whether on foot or behind the wheel that clicks with Jarmusch's droll script and relaxed approach with handwriting on the screen for a spark of inspiration. Even something as minuscule as a matchbox can lead to a sweet, rhythmic collection when he's not enjoying his one brew at a local tavern. The little details of the defeats and triumphs of a humdrum existence have a personal touch to them.

The nature of distress and melancholy permeating the effectual and delicacy offers breadth to Driver's character with poetry provided by Oklahoma-born Ron Padgett. Keen observation and contemplation influences the design of a particular craft. With laudable auxiliary work complements of Iranian-actress Golshifteh Farahani (Exodus: Gods & Kings) as baker/designer, aspiring crooner and urging paramour of Paterson. Not to mention the late bulldog Nellie who receives special dedication as the faithful, doughty Marvin.

Jarmusch again is content in knowing what he chooses to mete out through personal cinematic seasonings. They come by way of a typically modest production augmented by quietly illuminating lensing from Fred Elmes. Paterson could be embraced in specialized venues where Oscar Davis shined in Llewyn Davis or Ben Stiller and Greta Gerwig did in Greenberg or the latter in Frances Ha (in which Driver co-starred). It's a lovely lyrical, even wistful microcosm with notable imagery of Passaic that subtly lingers in its expression of amity and adoration.