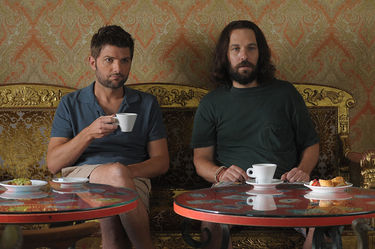 
The premise of Our Idiot Brother works but the film doesn't. Paul Rudd's Ned is The Fool on the Hill who observes and speaks truth even when it crashes down on his sisters and others.

Ned reminds us of a Woody Allen character inserted into a situation with high brows and suffocates who hide above a surface never revealing their true desires and needs. Simple mindedness in this case is translated into innocent honesty which can be embarrassing to others particularly to his interesting different sisters.

Ned is pushed back into the family, going home to live with mom (Shirley Knight) after a short stay in jail for selling a cop in uniform marijuana at a farmer's market. Making things worst his former girl friend Janet (Kathryn Hahn) dumps him and keeps Willie Nelson. Willie Nelson is the pet dog who has loyalty to his first master, Ned.

Ned is the only one who is comfortable with himself, each sister has problems mostly hidden until Ned casually spills them into the open. One case is a husband who claims he is nude with a dancer to make her comfortable while filming with no clothes. For Ned that makes sense and he tells his sister the wife who gets it. His revelation causes her to examine what appears on the surface as a perfect relationship.

His first new home is with sister Liz (Emily Mortimer), she is the one with the cheating husband and a son, River (Mathew Mindler) who loves the less strict path Ned follows he even allows a late night and extra sweets. Liz forces him out to save her stilted life style. Next he crashes with Miranda (Elizabeth Banks) who writes for Vanity Fair and uses his comfortable relationship with a subject to expose private emotions. Lastly he attempts to settle with sister Natalie (Zooey Deschanel) who is not sure about lesbian partner Cindy (Rashida Jones).

Rudd's honesty comes naturally and it rules the film, he even makes us comfortable with his simple carefree and exposing attitude. All of that brings some humor but not enough and the world of his universe does not change enough, leaving us with a somewhat empty feeling when it all ends.