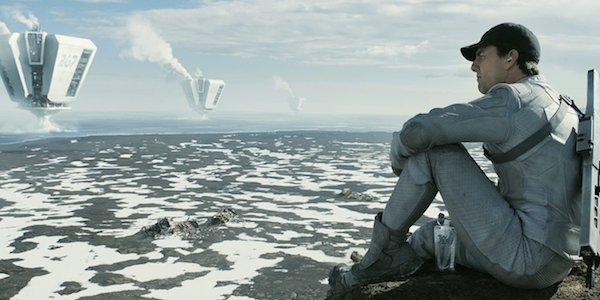 
This a traditional Science Fiction story filled with what can and can not happen, with twists of time, location and the ability to change human characteristics.  We are not ever sure that our vision of what we see is firmly on the ground or somewhere else.  It probably could have been called Jack Harper (Tom Cruise) because he is the core of everything happening on a destroyed Earth.

Director, Joseph Kosinski borrows from many former science fiction plots, from Star Wars its a triangular Death Star above the Earth and from the Planet of The Apes he uses the empire state building rather than the statue of liberty.

Aliens in the past attacked the Earth and Earth won but the planet is completely flawed, so water is being pumped from the home planet to a moon of Saturn where humans have established a new Earth.  Cruise provides the security by patrolling the Earth to keep the cave dwellers from challenging the relocation plan.  He is not the only one he is number 49 and is sometimes confused with number 51.  Challenged by a masked Morgan Freeman who leads the forces remaining on the planet, he takes orders from Melissa Leo an image and voice on a screen who is the authority he reports to.

Julie (Kurylenko) falls to Earth in a capsule quite like Charleston Heston in The Planet of The Apes as her landing is much like the ocean landings of the capsules in the Apollo Program.

Special-effects are used to create a new reality and not overdone as they have been so often recently.  They fit the devastated Earth and the sky Cruise patrols.  Even with the destruction the effects are at times filled with beauty.

The film may feel a little too long, but there is much to explore and explain, the multiple realities work but take time to absorb.

Cruise looks solid as a determined public safety officer and the chemistry between him and Riseborough shows through as real, as it provides the most emotional segments in the film.

Oblivion, works on two levels, science fiction and just plane action with all that how can it miss.