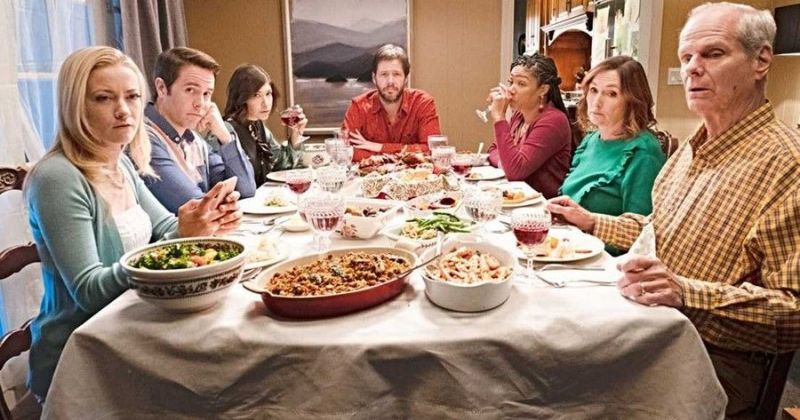 "The Oath" is stimulated by the current conflicted climate which includes a familial divisiveness and is fraught with wit and apprehension while not truly grasping its setup.

The two actors play well-off liberal married couple Chris and Kai about to welcome his much more conservative family for Thanksgiving, as well as other out-of-towners.

Kai wants her hubby to lay off the politics, but he can't temper his behavior when it comes to non-stop cable news and phone apprisals. Barinholtz's script intensifies well enough before he is greeted by tactical government emissaries (John Cho and Billy Magnussen) for a previous contact with an individual. Then, The Oath becomes more ominous, perhaps some comparing it to elements of The Purge that begins to dilute its percipience even if viewers are forced to mull over the sticky, fictionalized topical matter with more than individual persuasions on the line.

Here, a parody just can resonate like Jordan Peele's very riveting mystery/thriller Get Out. Nonetheless, if there is off-putting in a conceptual equivocating, then a more officinal handiness in the examination comes by way of the cast responding to circumstances which can spark indignation. Barinholtz, and especially Cho and Magnussen are effective. But, Haddish, going against type and less mainstream friendly, propagates droll bits, but nicely shades a part buffered by maternal instinct.