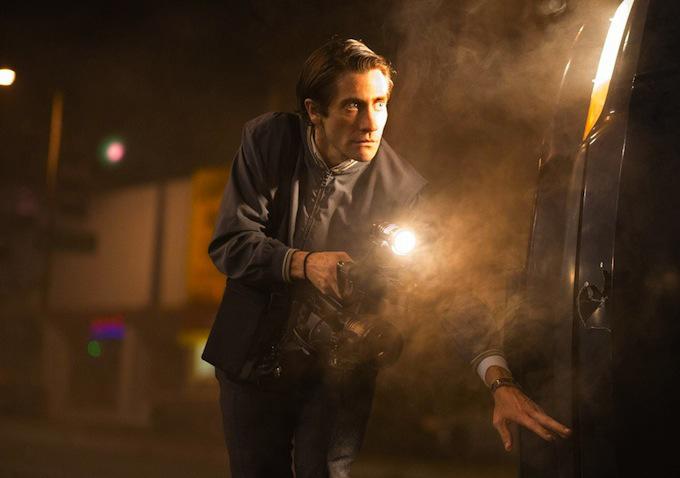 
Jake Gyllenhaal follows up his twitchy, wounded, steely vanity in the undervalued Prisoners as maniacal cameraman Lou Bloom with strikingly visual paparazzi images on his mind in Dan Gilroy's fantastically spine-chilling Nightcrawler. What really may be a ghastly comedy dressed up with plenty of nocturnal indecency about what it takes to make it in the current merciless climate of local TV journalism.

It's a different kind of L.A. based news film, a somberly modern and monstrous variant on the seminal Network with Rene Russo's Nina (a little like Faye Dunaway's devilish Diana Christensen)  as a no-nonsense mentor for Bloom who gets into freelance lensing work when other cheap, sordid opportunities don't work out at Venice Beach.

The producer in Nina will put nearly anything on her 6 a.m. broadcast, looking for visceral stories during the grave-yard period. Bloom's means to get a camera and police scanner will put him on a morbid path to car crashes, house fires, and crime scenes for an aggressive approach to seize the moments and wield the stories with cold-hearted fervor.

Lou's focused and a quick upstart to see what lifts ratings, as in what happens in the suburbs with white under racial coercion. Bill Paxton (Million Dollar Arm) is a veteran video news correspondent competitor that Bloom overcomes when it comes to crime scenes with the help of a nervy, hardly compensated driver (Ahmed Riz).

An emaciated, ever so vivid Gyllenhaal makes this harrowing hoot of a tale worth seeing in that hard-to-look-away fashion from his intensely gibbous and recessed visage. In ways to plunge the morally challenged protagonist in a position that gives him more credit and sleazy eroticism at the expense of Nina from his bloody discoveries, as well as the authorities.

Gilroy, known mostly for his writing and did direct Al Pacino and Matthew McConaughey in Two For The Money, finds a way to make this all pretty riveting, and caustically gratuitous to hit some hellish heights in a story that incredibly crawls under your skin. Especially the way the lamina of Gilroy's storytelling shuffles the wit and humanity with aphonic aberrance in union with his confidence to stage the material with evocative eeriness.  Perhaps like a movie opening on Halloween should with a treachery to bitterness and dread around such a nerve-rattling, gruesome tour.