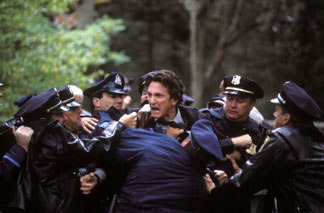 Clint Eastwood's terrific new drama explores how a tragedy that occurred many years ago links itself to a present day murder.

It begins with three boys making mischief outside their Boston homes.  Two child molesters drive up pretending to be policemen and put one of them in the back of their car, under the pretense of going to tell his mother of the boy's misbehavior.

Although, the boys are young, they know something is wrong and when Dave peers out of the rear window as he's being driven away, the scene evokes feelings of pure despair.

Dave is molested over four days and although he escapes, the horror of the experience is burned into his memory forever.

The story picks up years later and the three grown men have remained in the same neighborhood, but no longer are friends.  They reconnect because of another tragedy that brings them together.

Jimmy (Sean Penn) is a tough guy who owns a corner grocery store.  His teenage daughter, whom he doted on, is found murdered on the banks of Mystic River.

Sean (Kevin Bacon) is now a homicide cop, who is assigned to the case, along with his partner (Laurence Fishburne), and Dave (Tim Robbins) is now married to Marcia Gay Harden with a young son of his own.  He's marginally employed, has never recovered from his childhood trauma and his erratic behavior makes him the prime suspect in the girl's murder.

The acting of this stellar cast is a knockout.  Kevin Bacon can always be counted on to give a solid performance.  The other stand-outs are Harden as the loyal, but confused wife and Robbins, who creates a sympathetic and heart-breaking character.  However, it's Sean Penn who steals the show.  His acting is so raw and real, he brings tears to our eyes.

Eastwood is a methodical director who delivers a well-told, emotionally satisfying drama that is one of the best films this year.  The story grabs you from the very beginning and doesn't let go until the credits roll.