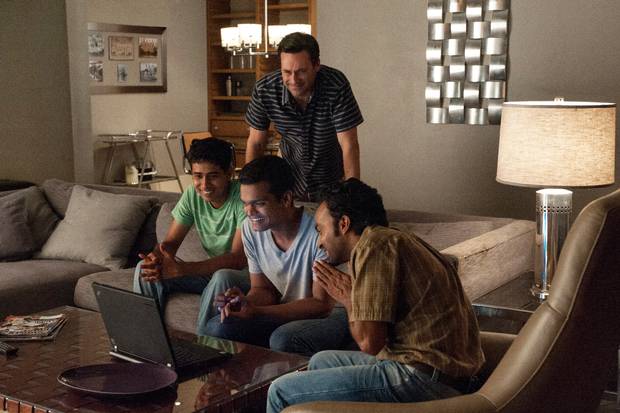 
Based on the titular competition that took place in 2008 another uplifting, cliched sports drama could be looked at as a marketing ploy (to reach out Bollywood/style) from the same studio which produced Miracle and Invincible.

Million Dollar Arm stars Jon Hamm, Lake Bell, Alan Arkin and Bill Paxton and carries a congenial vibe around the inspiration side of what ultimately values teamwork and family, as well as fun.

Hamm's presence as desperate, playboy sports agent J.B. Bernstein is evident from his stellar work as Don Draper in AMC's original series (now in its final season) Mad Men. What scenarist Tom McCarthy (Win Win) and helmer Craig Gillespie (Lars and the Real Girl) give him isn't nearly the same what Matthew Weiner continues to do on the small-screen. But for many it'll do in the underdog genre as Bernstein's narcissism and business sense gets an about-face when dealing with young athetically-inclined India natives who actually aren't that well versed in or really like playing cricket.

The plan is to mine an unexplored region to perhaps land the next big MLB pitcher and setting up a talent/reality-type show in India which has some of the more honest, affecting scenes as J.B. is out of his element. So, the unlikely finalists Rinku Singh (Suraj Sharma of Life of Pi) and Dinesh Patel (Madhur Mittal of Slumdog Millionaire) end up having more of chance to make good off of prize money to make their families proud (when competing near the Taj Mahal, to help with a family business, for example) when the potential to sign with an MLB team could come knocking. As J.B. knows the importance to boost merchandise sales in this long-away locale with pressure on him from investor Chang (a pretty brittle Tzi Ma).

Audiences will be drawn into the contrivances as Rinku and Dinesh travel back with J.B. to southern California having to train six months with notable USC pitching coach Tom House (done with sympathy and candor by Paxton). But the coach from his initial impressions doesn't think it's enough time for their big break to come to fruition. While much of Million Dollar Arm reflects the culture shock in a fairly sweet, heartfelt way as there are appealing scenes with Rinku and Dinesh riding an elevator and having pizza, it's really about recognizing the qualities in those closest to you who can bring clarity into how important the big check really is. Even after they get in a jam when not in close proximity to J.B.'s chances to trend back into the wealthier high-stakes world that's been customary for him.

Though the dramatic intensity of the storyline really doesn't take hold, Hamm's professionalism keeps the relatively unsympathetic J.B. in check. Sharma and Mittal offer a nice dose of naiveity and innocence as well as competitive spirit to the disparate, ardent upstarts while Pitobash Tripathy provides instances of comic relief as bewildered and enthusiastic assistant and translator Amit. Lake Bell is a charming, if too obvious moral compass as J.B.'s gradually less distant tenant Brenda and Arkin isn't as sardonically piquant as he was as a movie producer in the recent Oscar winner Argo.

Even for those who know how it all went down that makes good on second chances especially close to one of the franchises at the workout what's mostly predictable and a bit drawn out still shines more than it does with shots of the real threesome at the conclusion. It's a pat and sentimental touch but seems to resonate more than it should, in part because of a production most rhythmic and robust in its resonant contributions from award-winning composer A.R. Rahman (even through the end credits). You might feel or long for that zesty poignancy that made Slumdog Millionaire so memorable.