The Lives of Others 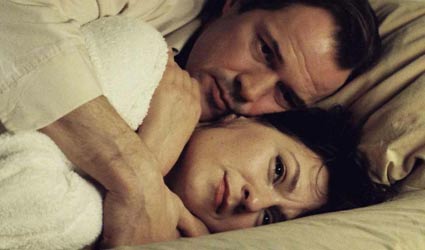 
Harsh life in the former German Democratic Republic is deeply and thoughtfully felt in The Lives of Others, in German with English subtitles.

In the fall of 1984 the Communist, repression existence comes from Ulrich Muhe's Capt. Wiesler whose task is to watch a playwright, Dreyman (Sebastian Koch).

His significant other is actress Christa-Maria, strongly acted by Martina Gedeck. She happens to be looked at closely by Thomas Thieme's government minister.

It happens that Capt. Wiesler becomes enamored with Christa-Maria while voyeuristically trying to ensnare the playwright. Things get more intricate as the slyly, calculating Wiesler starts to find out the true nature of Dreyman's activities.

Provocative and insightful, The Lives of Others identifies the subversiveness and conflict in East Germany with humanistic versimilitude.

It catches into the zeitgeist not so far removed from the repercussions of the Joseph McCarthy communist witch hunts. Director Henckel von Donnersmarck puts the viewer right into the clandestine and treasonous aura with a constricting cogent way, from the dialogue to the chance to lose freedom in a moment's notice.

The magnetism of the story works effortlessly with the striking characterizations, especially a muted Muhe, and the emotionally resonant work of Gedeck and Koch.

With its dark, ironic textures and detailed interplay, The Lives of Others holds one firmly in its grip in a shocking, yet soulful manner. The final act of a lengthy, but beautifully produced picture has a series of potent wrap-ups as the adroit editing and haunting music lets one into a remarkable excursion into the bracing nature of life as vivid as it can get.