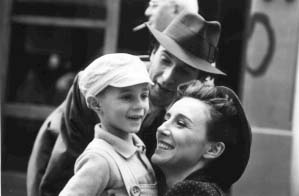 Roberto Benigni attributes the essence of Life is Beautiful to the Russian revolutionary Trotsky who wrote as he waited for Stalin's hit-men to kill him that he still thought life is beautiful.  It could easily be attributed to Ann Frank and perhaps many others who survived or caused others to survive Fascism and anti-Semitism.  How Benigni weaves heartbreak with comedy, romantic dreams and hope for a small boy, produces one of the finest film of 1998.

Guido (Benigni) a clumsy free spirit brings comedy to everything in his life including his courtship of his future wife Dora (Nicoletta Braschi).  In his joy he avoids taking notice of the Fascists as they take control of the Tuscan town of Arezzo.  His frequent trips to the authorities become routine, the sacking of his uncle's home, painting of a horse and Jewish business painted across the door of his book store only move him to satire.  He is not political, he is in love with Dora and his son, Giosue (Giorgio Cantarini).  His antics to win Dora's heart, occur by chance and by careful engineering.  His courtship fills the first half of the film with extraordinary silent film comedy reminiscent of Charlie Chaplin.  Filmed in Italian, the sub tittles are easy to read because of the physical comedy used to paint the story.

Benigni's sense of humor is at the heart of the film, but the cleaver screenplay is the soul.  Small events in life become a foundation for survival when the family in placed in a concentration camp.  Like many kids Giosue doesn't like to take baths and he loves tanks.  He  trusts his father completely.  The screenplay is filled with tension, beauty and joy. Guido's surrealistic world becomes Giosue's reality, under the most difficult circumstances they play a game of points to secure first place and gain the best possible prize, a tank.

The courage of the journey through captivity is enhanced by music of Offenbach, teaching German kids to say thank you in Itallian, hiding in boxes, speaking to Dora over the public address system and interpreting German words into a pattern of the rules of Giosue's game.