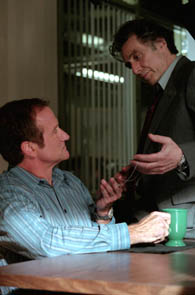 After seeing Memento, one would expect great things in the next film by its director.

This remake of a 1997 Norwegian thriller just goes to show how are a hit film can take a director.  Perhaps I had too high expectations, but when the dialog falls to cliché cop talk the film has a hard time rising above it.

The film is about two of LAPDs finest who are sent to Nightmute, Alaska in an effort to prevent internal affairs from building a case against the lead detective, Will Dormer, played by Al Pacino, while helping a former LA officer solve a murder.  Tie this to a local police officer played by Hillary Swank and one would think a decent film is to follow.  Think again.

The cinematography, the Alaskan landscapes in particular, is excellent.  Unfortunately if the highlight of a film is the scenery, there is not much else to say.  This film could have been done is less than an hour for TV and positively done better.  Not to take away from Pacino or Swank, both deliver strong representations of poorly developed characters; one can only do with what a script offers.  Even the ending in this drama is contrived and weak, exchanging thriller type smarts for bang, bang, shoot 'em up action.

To sum it all up, make sure your popcorn is hot, your soda cold and you bring NoDoze, as Insomnia is a real sleeper.