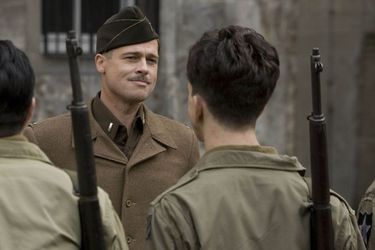 
Quentin Tarantino's heavily gestating war film gets its purposely misspelled title from Enzo G. Castellari's 1978 picture. Despite its length and the auteur's indulgent tendencies, this violent WWII fantasy/adventure has a brash confidence from its defiant premise that calls to mind the recently, unsuccessful Valkyrie.

Divided into five chapters (like Kill Bill), Inglourious Basterds (in English, French, German and Italian) stars Brad Pitt and Diane Kruger (both had starred together in the sweeping Troy). In the first year of the German occupation of France, Shosanna Dreyfus (Melanie Laurent) witnesses the execution of her family at the hand of Nazi Col. Hans Landa (Christoph Waltz). The comely Shosanna barely escapes, ending up in Paris where she starts a new life as the owner/operator of a moviehouse she inherited. She has plans for the "Jew Hunter" high command who'll be going to a premiere featured a distinguished, courting war hero (Daniel Bruhl).

In Tarantino's dialogue-driven reimagining, Pitt was the primary and only choice to be Tennessee-based Lt. Aldo Raine (remember the actor Aldo Ray who appeared in many action/war pics) who organizes a group of Jewish-American soldiers to perform swift, shocking acts of retribution (the awareness from the film's advertising is evident). Their operation will intersect with Shosanna's cinema with assistance from a duplicitious, glamorous German actress Bridget (Kruger) and cinema expert and adroit British spy (Irish actor Michael Fassbender).

Older cineastes will feel the influences of The Great Escape and especially The Dirty Dozen, as well as The Conformist and the stylings of Sergio Leone and master composer Ennio Morricone within the WWII iconography.

One can't deny the level of craftsmanship to make the revenge scenario all the more vivid and visceral (maybe too lurid for some). In a cast which has filmmaker Eli Roth (his trailers appeared in the Tarantino/Robert Rodriquez B-movie homage extravaganza Grindhouse) and Mike Myers in some interesting parts, one wielding a baseball bat, the other as a General, Pitt fashions out a character connected with moonshine with a broad Southern bravado that works in a similar vein to his dumbed-down fitness character in Burn After Reading. Check out his Italian disguise.

Kruger and Laurent make the most of their well-written parts which lead into the film's darker corners as one is reminded of Marlene Dietrich and the stunning countenance used to full effect. And, lesser known thespians like an uptight Til Schweiger, Martin Wittke and Sylvester Groth have their moments sometimes in grotesque cartoonish ways as one of the "Basterds", Hitler and Propoganda Minister Goebbels, respectively.

The real scene-stealer in this eclectic, anachronistically blithe foray is Waltz whose diabolical inquisitive prowess holds one attention and the film throughout. Tarantino's love of film, especially European and its history is evident as his distinctive stylings and mise-en-scene understanding makes this garrulous, sometimes ironic and grisly elongated escapade his "Pulp War Fiction".