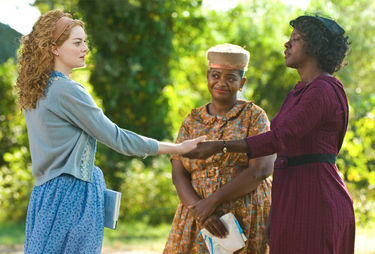 
The Help is a worthy adaptation of the acclaimed Kathryn Stockett novel about an unlikely bond of three women in 1963 Mississippi. Medger Evers and JFK are among the real-life victims during the time when Civil Rights was beginning to blossom. Even when one character mentions that it will probably blow over.

Davis and Spencer play the titular figures (privileged families' black housemaids) of Aibileen (who narrates) and Minny, respectively, with disparate emotions, emotional baggage and body language in a story filled with personal recollections of joy and sadness. Stone's linchpin in Eugenia "Skeeter" Phelan is the real protagonist as a young educated woman strongly influenced by her maid Constantine (Cicely Tyson) from childhood. She's determined to write about it when hired by the Jackson Journal with deadlines imposed by her boss (Mary Steenburgen).

Taylor exposes the emotional underpinnings as the lives of Skeeter, Aibileen and Minny have connection in a generation, surrogate way with issues of strong thematic resonance like segregation coming to the forefront with cute instances of levity emerging (not always so naturally). He does so in a production attuned so well to the period when it comes to the well-manicured domesticity, including the wardrobe, lifestyles and lingo.

Even for those unfamiliar with the phenomena that Stockett detailed to the delight of so many, the stories that unfold in a time when it was taboo to cause any social discordance come across in an honest, affecting way. Skeeter's curiosity and subsequent "courage" is based on long-lost and loved Constantine as Stone and a fine Alison Janney as Skeeter's mom (who wants her with someone like Chris Lowell's Stewart) have a tense interlude when Mrs. Phelan finally reveals her role in accepted behavior.

Davis (so good in a brief turn in Doubt) is so effective in espousing the reluctance and fear in someone so loving as a caretaker who becomes less subdued as Skeeter's (anonymous) work takes form. Spencer is ideal (watch her expressive eyes) as the servant for the ostracized, hyper housewife Celia Foote (Jessica Chastain in sharp contrast to her wife and mother in The Tree of Life). A busy, if too shrill Bryce Dallas Howard (Hereafter and Ron's daughter) is a part of the two scenes which get the most audience reaction as the harried benefit-driven, bridge club member Hilly Holbrook who obviously has her own perspective on the help.

What is probably more resonant from the distaff side (though not ostensibly the 'chick-flick' it appears to be like an Eat, Pray, Love) is benefitted by the tall Stone's gradual impressive range as a young actress. She shares a similar awkward ambitiousness to the role she plays in Crazy, Stupid Love, but her energy and spunk are decidedly low-key due to Skeeter's attentiveness to racial barriers. It rarely comes off as studied and manipulative through what she uncovers in the family/maid dynamic. Even with memorable scenes opposite Howard, Davis, Janney and a mad, yet funny Sissy Spacek (see Get Low) who knows a thing or two as Misses Walters.

Here is a studio product that doesn't wallow in the usual saccharine, cognizant of the hardships and trials of the era, and has a point that has broad, gender generational appeal. As is the case of many adaptations, it's hard to reproduce all of the spirit its relational and narrative nooks and crannies entail. But, the premise is faithfully realized albeit with structural lags that for many may deserve another helping - not just a piece of Minny's succulent chocolate pie.