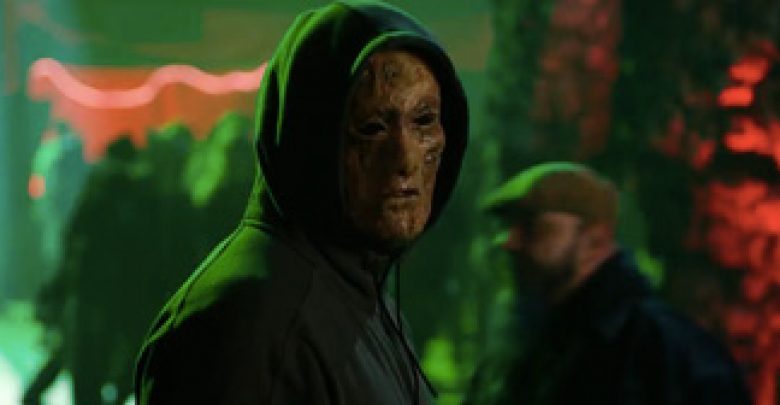 
Hell Fest finds solace in the macabre labyrinth inclusions to many large-scaled theme parks, having a promotional tie-in to some of them weeks before All Hallows Eve. But, Gregory Plotkin (editor of the heady hybrid Get Out) is unable to use the foreboding foggy neon-infused setting do much to allow for notable pulse-pounding, frantic activity.

A couple twists will be even ho-hum as more horror buffs presumably await the latest incarnation of Michael Myers facing off against a middle-age Laurie Strode when this barely full-length feature will have disappeared from the multiplexes. A prologue to the main action (a year henceforth) has The Other as listed in the credits (inhabited by Steven Conroy) offing a female before this masked, hooded serial killer has his sights set on a haunted intricately fashioned amusement facility (say, like Six Flags). That's the destination for estranged close university chums Natalie (Amy Forsyth) and Brooke (Reign Edwards) with a plucky Taylor (Bex Taylor-Klaus) in tow.

The male characters who accompany them are more vacuously drawn than them, though what comes out of anybody's mouth really doesn't matter once those (when displaying devotion) unbeknownst to the damage The Other has begun to inflict from the way this supernatural-like presence apparently stealthily maneuvers between the eldritch network. A knife, syringe, and mallet are among the weapons of choice, and, of course, an electronic device malfunctions leading to at least one edgy restroom sequence (Natalie and Brooke share another that has an Eyes Wide Shut vibe to it).

There's an appearance by Tony Todd (remembered from Candyman) as an emcee/barker type to help in an ill-fated retrograde jump-start. Trashy, campy entertainment with more of a clever take on the genre like Tobe Hooper's similarly low-budgeted The Funhouse isn't evident in what slashes up the horror and offers little insight to its bogeyman and his stimulus.