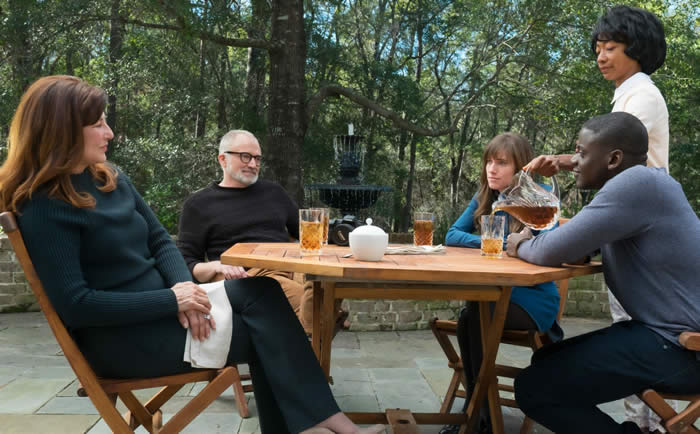 Using many effective devices within a very capable script Peele allows us to theorize as to what is happening behind the scenes.

It begins as two young folks played by Washington and Alison Williams decide he should meet her parents even before she informs them he is a black student. She is confident he will be accepted, after all she says my father would have voted for Obama for a third term if he could have. Later when dad Bradley Whitford uses the same exact phrase we begin to wonder what is happening.

Early on Director Peele introduces us to Police Officer Ryan (Trey Burrant) who demands to see Washington's license even he is not the driver of a car that hits a deer on a rural road on the way to the homestead, just a little racial tone slipped into the script.

The arrival is filled with warm welcoming for the new potential family member, but two black employees played by Marcus Henderson who is a completely happy satisfied gardner and Betty Gabriel a flawless black servant who is silently frightening. Lakeith Stanfield is another black resident who is married to a much older white woman and who dresses like a white character form a film from the 50's, they appear odd to Washington.

With the atmosphere established Peele brings in a reverse use of a flash as compared to Men in Black, and a tea party between the mother Catherine Keener and Washington which caused him to feel free and floating in an endless black dimension with no control over his body.

With just two jump scares the script continuously carries a dark potential which hangs over each scene, as Washington becomes more and more concerned about the world he has been carried into. The tension is never released it becomes deeper and darker as time passes and except for the welcome comic releases which come from an effective performance by LilRel Howery a friend who becomes concerned when Washington does not return home when he is expected.

Get Out is a film Hitchcock would have loved to be a part of.