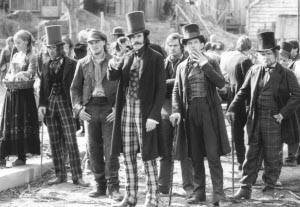 Martin Scorsese' Gangs of New York goes back over 160 years before Scorsese started with Mean Streets and he puts it all in a historically engrossing street-smart perspective with Leonardo DiCaprio and Daniel Day-Lewis leading the way.

Day-Lewis was memorable in Scorsese' other riveting period piece, The Age of Innocence, and DiCaprio's career hasn't been very buoyant since the behemoth glory of James Cameron's Titanic.

The mobile camera begins to focus at the outset at Five Points in Manhattan's Lower East Side in 1846.  A father and son are on the verge of leading fellow immigrants through a catacomb like environment, finally rising into a city's lit hub.  What ensues in the wintry setting is a blood-fest from their group with those positioned to attack after some terse discourse.

Liam Neeson's Priest Vallon is the dignified Irish immigrant head of a wild bunch known as the Dead Rabbits.  During the frightening street brawl, he is viciously killed by William Cutting (Day-Lewis), who heads the Nativist.

At Vallon's side after the visceral murder is Priest's son who subsequently is remanded to an orphanage.  As played intensely by DiCaprio, his Amsterdam Vallon is seething with revenge.  Mr. Cutting, known as "Bill the Butcher," is having a gala to mark 16 years since he brought down Vallon.  Scorsese allows DiCaprio to narrate, like Good Fellas, with Amsterdam intent on getting close to the glass-eyed, mustached Nativist.

There is an element of romance and sexuality that cues into an important triangle linking Amsterdam and Bill the Butcher.  A tension arises with Cameron Diaz's enticing pickpocket, Jenny, who has intimate relations with both.

Where Gangs of New York achieves much of its excellence in the craftsmanship of the city without the use of computers.  Scorsese has a trio of screen writers, Steven Zaillian, Jay Cocks, and Kenneth Lonergan, who find a complex rhythm to Herbert Ashbury's 1928 non-fiction book that vividly rekindles the times of Ireland's potato famine and the Civil War, with most of the action mindful of a country divided.

This remarkable recreation of the forefathers of organized crime includes a vibrant metropolis with Cutting teamed up with Tammany Hall politico "Boss" Tweed, sharply played by Jim Broadbent.  The portrayal of all these bitter factions is unsettling in ways that take firm hold of an ethnic divide.  The bad blood between the Irish immigrants and Anglo-Saxons, many who whom are Dutch has increasing stature in the immigrants being shipped immediately in draft status to fight against the Confederacy.

Scorsese is able to depict some of his best, haunting drama in capturing the turmoil of the Draft Riots as a devastating battle occurs within a large-scale war. Gangs of New York isn't an empowerment of violence and it's hard to overlook this ambitious undertaking as something less than what the director's career was building toward.  A turbulent age for new York comes alive with dynamism in understanding the mordant fury of its denizens, especially Day-Lewis, who amazingly counters the driven, often dashing DiCaprio.  Scorsese may not reap Titanic rewards as the sinister shadings of Lower Manhattan is engraved with feeling for a city that once had a barbaric, mostly historically unknown political side.