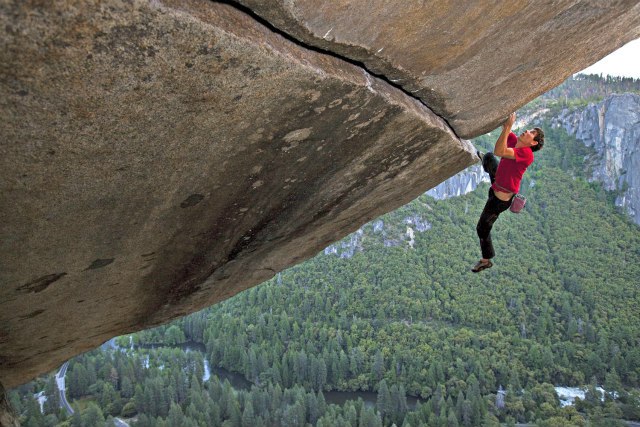 The title refers to performing the task like what folks have seen with stars like Tom Cruise in M:I2 without any tools, like harnesses or ropes.

At the outset, if you're not watching it on an i-Phone or typical small-screen (even in this age), it's hard not to experience a little giddy sensation, as warm-ups leading to the main extreme event is fittingly breathtaking and edgy, indeed.

Being that the filmmakers are close to the seasoned Honnold and those of his ilk some amazing viewpoints are secured. This depiction posits the notion of the dire what if, which includes the unit up there with him slips up (in more than one way) that could thwart his objective.

Honnold is like a migrant out of his van and doesn't dole out much information about himself or why he is into such dangerous stuff. The guy who doesn't know his way around a coffeemaker confesses he would "always choose climbing over a lady." The apprehension felt in this experience is to some extent the relationship he develops with Sanni McCandless after a book signing. A colleague mentions that Alex has had a couple of serious falls since she entered his life with none prior.

His stolid nature may be genetic after an MRI exam when experts checked his insensitivity to panic via the cortex and amygdala. But, the massive risk-taking sequences of Free Solo should easily elicit quite a response before Tim McGraw belts out a cloying, if uplifting tune. Even with a less than winsome subject, Chin and company offer sufficient shading and plenty of thrills to their truly captivating cliffhanger.