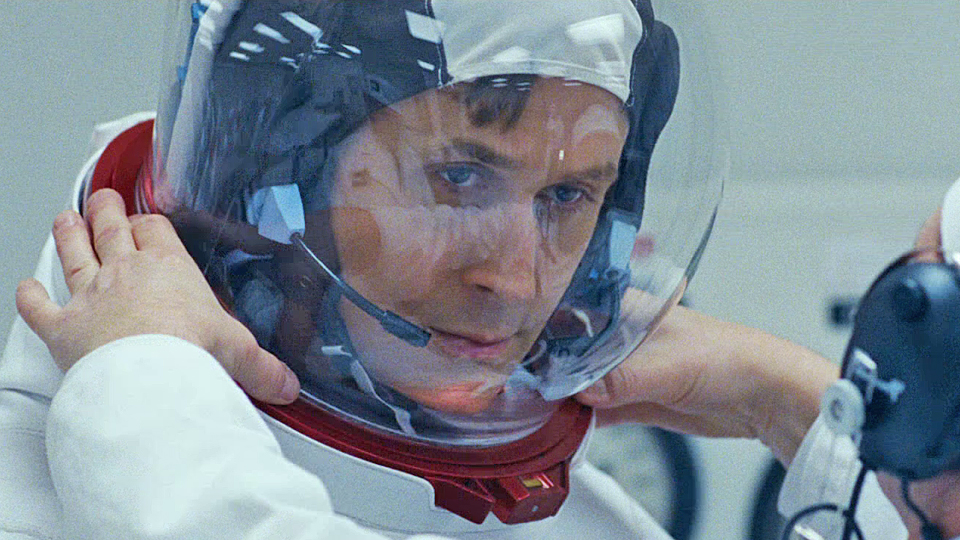 
First Man is just what it states.  It is the story of Neil Armstrong the astronaut, and introspective human rather than the larger experience of the first flight by men that reached the surface of the Moon.

Director, Damien Chazelle (La La Land) brings a Neil Armstrong (Ryan Gosling) to the screen that is at times a dark personality who is introspective, quiet and hard to get an answer from.  He is determined to learn details and is committed to stick with the program even when it places concerns in his wife's mind as he heads into space. Claire Foy is the woman who waits for him to return as she listens to the communication from and to his capsules in space.

Armstrong, who did not use his fame after the Moon landing, made one exception, his cameo appearance in Ron Howards masterpiece Apollo 13 which was a potential disaster that became known as the finest hour for NASA. Apollo 13 in contrast to First Man is constantly up-beat. Chazelle works a different side of men in space and the space program.  He fills the film with narrow close up shots of both the astronauts and their wives and in the Apollo capsule which appears tight, small and confining for the three men headed to the Moon.

The restrictive scenes are framed to provide the viewer the feeling of being in the capsule on top of the Saturn rocket with 7.5 million pounds of thrust pushing the space craft faster than a bullet from a gun.

The most exciting scenes occur as the lunar lander approaches the surface of the Moon, it is a cliff hanger as the vehicle begins to run out of fuel and Armstrong uses his pilot, engineering, scientist background along with his precise determined personality to hold steady and land on the Moon.

Chazelle constantly brings out the dangers of the space program and the pitfalls rather than the successes.  He takes care to precisely show the deaths of Virgil Grissom, Ed White and Roger Chaffee in a fire on top of the gantry, but does not mention, the Apollo 8 flight of Frank Borman, James Lovell and William Anders that circled the Moon giving a view of Earth shine which produced the first pictures of the Earth from the Moon.

First Man is less about mankind and it's first step to another body in space and more about Neil Armstrong.  Armstrong who could effectively handle the most dangerous and spectacular adventure humankind has ever entered into.  Armstrong's story is interesting but pails before the adventure he was part of.  Space travel is far and above more exciting and fascinating than the men who took part in the program.  Chazelle brings us the pain with little of the joy of the success of the United States space program.  Apollo 13 did just the reverse, it took a failure and made it a brilliant success.  That makes for a more enjoyable film to watch.

The space program is not just one person, even when he is the First Man.  Armstrong's story is fascinating and powerful, but not as uplifting as it should be.  That limits the success of this film which should have us dancing in the streets or rubbing our hands together like Walter Cronkite at the joy of Armstrong's accomplishment.