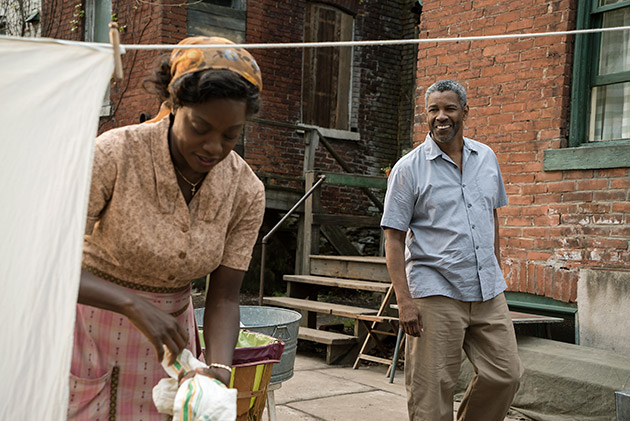 Washington plays Troy Maxson, a  Pittsburgh trash collector who lives with his wife Rose ( Davis), and teenage son Cory (Jovan Adepo).  Troy is a hard worker, who shows up everyday to ride on the back of a garbage truck with his co-worker and buddy Bono (Stephen Henderson).

At the end of the day, they walk to Troy's backyard where the men swig from Troy's ever-present bottle of gin.  Troy loudly spouts off about every thing from his problem with no black drivers on the job to wild stories of him actually wrestling against Death.  He curses, gets mellow and flirty with his wife who comes out on the back porch to cajole or laugh with her husband. After a few minutes, he  remembers what he had been complaining about, and goes back to yelling about something or other.  This man loves to hear his own voice.

He loves his wife and is constantly teasing her with explicit talk, or cozying up to her when she is near him.  Rose puts up with a lot, but the smile she gives him shows that she takes most of what he says with a grain of salt.

Everything revolves around Troy, his job, his friend, his wife, his mentally injured brother Gabe (Mykelti Williamson), his married son Lyons (Russell Hornsby) who stops by on payday to borrow a little money, and his son Cory, who argues with his dad over a football scholarship that he's offered.

To say the least, this man is difficult.  He has no easy relationships, and when keeping quiet and walking away would end an argument, its as if he never heard of the concept.

The play debuted on Broadway 29 years ago and is set in the 1950s, but the feelings and emotions expressed could be from any time period.

Directed by Denzel, the confined backyard setting gives the audience the feeling that they are watching a play  The performances are all moving and real.  The two stars however, are superb.  Watching Viola Davis dig deep to cry for long, heartbreaking minutes of screen time is wrenching.  And while Denzel was on, you concentrate only on him.  His personality takes up all the air around him.  They both work off one another, and the result is a perfect acting experience.