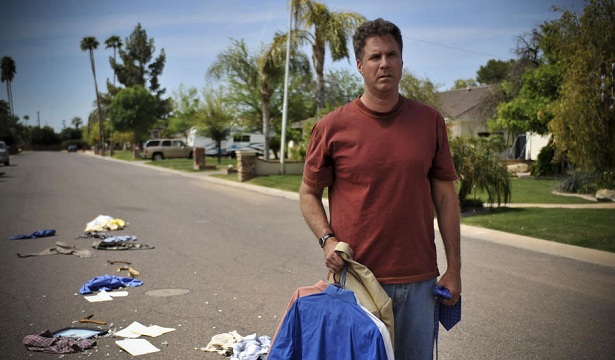 
Will Ferrell has a change of pace from his normal slapstick studio fare (like The Other Guys) to help bring a lifelikeness to a Raymond Carver short story.

Everything Must Go is based on Carver's Why Don't You Dance? and has a timely element to its setup regarding its protagonist in Ferrell's crestfallen once top salesman, relapsing alcoholic Nick.

His misses has tossed his belongings outside and the locks are changed at their Arizona residence. Nick decides its time to spend some extra time on his lawn and have a little sale. According to a cop and his Alcoholics Anonymous sponsor Frank (Michael Pena), it's all right to stay there for about a week. So, as he settles in, the storyline involves a kid (Christopher Jordan Wallace) he retains and meeting a new, potentially helpful neighbor (Rebecca Hall, from Ben Affleck's The Town).

Nick's new reality of not having a wife and job has left an essentially decent fellow in a sad state with no cell phone, company car or bank account to fall back on. Ferrell is able to show again, after the more whimsical, somewhat far-out Stranger Than Fiction, that he can relate a viably average guy obviously hindered by falling off-the-wagon.

Writer-director Dan Rush sees this as a choice opportunity to tap into a disconcerting anxiety while keeping the mood light and having Ferrell assume the role in a nicely understated way. That doesn't mean one can't feel any darker underpinnings at work here from personal and societal seismic shifts that are closer than may be realized. It is done effectively enough from a small budget that doesn't fall into pitfalls many like this regarding sad-sacks can become.

The minimalist approach from the filmmaking and its ranging star has a reflective quality that extends to the cast as a whole. Ferrell has solid interplay with his costars, notably the younger Hall (who will get more auditions after this) and this continually rising Hall, both of whom have much personality to offer. Even Laura Dern makes the most of what is a cameo after being caught amid some familial derailment in Little Fockers.

Obviously, Everything Must Go is more of a specialized, upscale offering that will be hard to draw Ferrell's devout followers. Yet, Ferrell has a talent that communicates life in close-up with more dramatic flair than what this slice-of-life as a whole demonstrates by facing chaos and despair with offhanded, humanistic foresight.