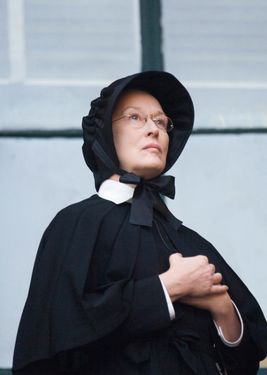 
John Patrick Shanley's adaptation of his own play has a lot going for it, including the classy, iconic Meryl Streep and prolific Philip Seymour Hoffman, both Oscar winners. But, the translation of the cerebrally succinct Doubt to the screen leaves some questioning its veracity and emotional force. Maybe not those who value character and dialogue when it comes to year-end accolades.

Shanley, not having directed since 1990's failed Joe Versus the Volcano, opens up the spareness of the source material for the Bronx's St. Nicholas parochial school in 1964. So, the political, social, racial subtext are there as Streep's brusque, imperious Sister Aloysius, in full bonnet, reigns over the mainly Irish and Italian parish.

The faithful Sister James (Amy Adams) shows concern when the school's first black student, Donald (Joseph Foster II) is given preferential treatment by Father Flynn (Hoffman). It arouses suspicion in Sister Aloysius, and she isn't happy with Flynn's "liberal" ways, which extend to how he has tea and delivers his sermons.

The inevitable confrontation of Flynn and Aloysius helps to charge the proceedings, but they pail to a degree in comparison to the encounter of the Sister and Donald's grievous mother, a valiant Viola Davis. The exchanges between Hoffman and Foster have an awkwardness

Thus, Doubt is bracing in how garrulously raises some important issues and questions, and has a certain trenchant quality to it. But, the close-ups, histrionics, and Streep's externalization of what Cherry Jones brought from the inside on stage with even Hoffman going from ambiguity to a certain overstatement. If the dramatic intensity doesn't come off as well who remember Jones and Brian F. O'Byrne going at it on stage, then the moral relativism and certitude still is mindful and passionate.