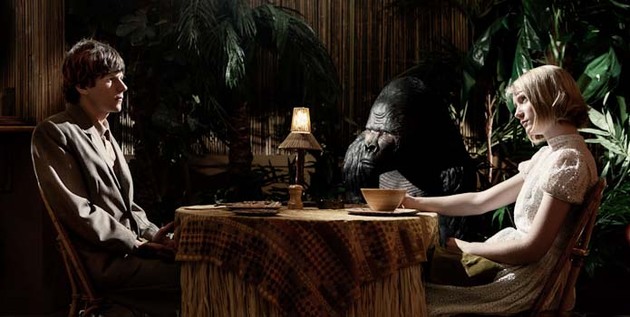 
Richard Ayoade's latest is a thriller made with much ambition, elucidating a fine hallucinatory quality as drawn from a Dostoevsky novella that surprised more from its coarse murkiness.

Still, The Double starring Jesse Eisenberg (Rio 2, Now You See Me) and Mia Wasikowska (Only Lovers Left Alive, Stoker) provides some oddly dark wit in alternative reality-like fashion (though appearing to be set somewhat in the past since landlines are most visible). An identity crisis is prevalent in what is ultimately is too vague on an emotional level for the quirkiness of the arguably entertaining approach to really connect in spite of a sprightly, game cast of characters.

Eisenberg slips effortlessly into Ayoade's seamless, often clever vision as unassuming, unrecognizable faithful employee Simon with the unenviable task of coaching snobbish teen (Yasmin Paige) daughter of weird boss (Wallace Shawn). James (Eisenberg, again) not long afterwards becomes a colleague, a doppelgänger who upends the invisible, hard-working seven-years-on-the-job Simon with a brash spontaneity. That makes for shifting, interlocking actions involving Simon's feelings for the alluring copy girl Hannah (Wasikowska) and his chance for a promotion. James is what a solitary Simon yearns to be as the latter is stuck around overzealous security amidst a bitty cubicle and mechanized ambient sonorousness.

The affected if numbed storytelling if mitigated to a degree around the logistical, if broadly derivative setup of hues and disquietude in a metropolis as well as colorful supporting turns by those who've working with the fun-loving, careful filmmaker before.

Noah Taylor, Paddy Considine, Craig Roberts, Sally Hawkins as a colleague and even Cathy Moriarty as a waitress provide at least some welcome moments of pungent humor. Wasikowska is able to play well enough off of the Simon/James dynamic as the former who can be a sweet, if creepy voyeur when it comes to Hannah is given tips about a relationship with her.

Maybe too much of Eisenberg (good also in larger-budgeted fare like Zombieland and Adventureland) isn't always the best thing but isn't out of place in what works best as a creative dark comedy. Yet, in these two opposing roles he isn't less than convincing as what the idea of James is to Simon that really doesn't stick in our minds or imagination afterwards like it should.