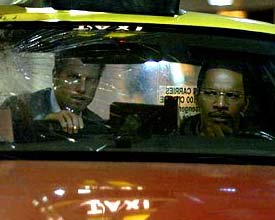 Thrillers are usually made up of small doses of dialogue sandwiched between large doses of killing and chase scenes. This Tom Cruise drama focuses instead on complex, well written dialogue and interesting characters.

The opening scene has Max (Jamie Foxx) an L.A. taxi cab driver, picking up a pretty woman (Jada Pinkett-Smith), who is confident and smart. Before the short ride is over, she and Max open up to one another, revealing a great deal about themselves. It’s an easy, flirty banter that tells the audience more than we normally get to know about characters. This setup allows us to care about what happens to these two people.

Cruise plays Vincent, a sharply dressed, salt and pepper coiffed, contract killer. He randomly chooses Max to drive him around while he methodically “takes care of business.”

He offers Max $600 to drive him to several stops. At first, Max is unaware of what exactly his fare is up to, but he finds out soon enough when he becomes closely acquainted with one of Vincent’s “jobs.”

Because Max and Vincent are usually photographed in close proximity to one another, we see the emotions that wash over Max’s face; fear, disgust and anger as his psychopathic passenger is spouting one crazy thing after another.

Director Michael Mann uses the concept of meaningful conversations between the characters, even minor ones, throughout the film. A stop at a jazz club or a quick visit to a hospital to visit Max’s mother, reveals a great deal. It gives insight into each character that evokes reality.

Cruise is strangely spectacular in this different kind of role. He plays a controlled, tightly wound, dark and scary guy. But, as good as he is, Foxx is surprisingly better. He runs the gamut of emotions, in fact everyone is on the mark believable.

This summer is filled with pretty good action films. However, this smart, involving thriller is one of the year’s best.