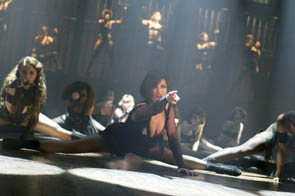 Rob Marshall has more than all that jazz to transform the revived Chicago into a highly cinematic experience choreographed with pizzazz and sensibility.  The Kander and Ebb musical is angled sharply into today's headlines of celebrity with scandalous and criminal allure.

Director Marshall moves successfully into a vaudeville, theatrical Prohibition era setting with smart insight by screenwriter Bill Condon integrating musical numbers into the film.  And, from the time Chicago lights up in the opening, the nifty neophyte director and his scenarist pay homage to Bob Fosse's auspicious screen treatment of Cabaret, making it crisply tailored for Broadway fans and even MTV aficionados.

From the original 1926 play, show business is energized as a three-ring circus as life in the Windy City for Roxie Hart (Renee Zellweger) is only half real.  Roxie yearns to be a popular singer-dancer like her idol, Velma Kelly (Catherine Zeta-Jones).  The opportunity occurs as both of them are incarcerated for homicide.

Much of Chicago keenly unwinds on the prison rivalry of Roxie and Velma with the two gaining representation by the dapper, Billy Flynn, played with enthusiasm by Richard Gere, the lawyer who knows what buttons to push when it comes to notions of fame, jealousy and greed.

What often cues the nod to Cabaret is the use of "bandleader" (Taye Diggs) in a quasi-Kit Kat Club setting as he emcees the numbers.  Most underscore Roxie's fantasy world in between her menial, incarcerated existence.  Marshall and Condon give ebullience to what flows from Roxie's "Onyx Club," markedly abetted by the infectious jazz music accompanying distinctive, lively tunes.

The two starring actresses are well cast, with Zeta-Jones having stage experience with the London theater early in her career doing "42nd Street."  Both have a passion for their parts that would have met Fosse's approval.  Zellweger turning in a more nuance performance given her squalid background and the sympathy she generates while leaking her wanton side throughout.  But she steals the last number in a convincing flapper style.  Zeta-Jones exudes command and conniving appeal into the sexy Velma who takes action when her trial is put on hold as Roxie's case takes center stage and is the talk of the town.

Even if Gere may not be from a gifted musical family, his Billy Flynn engages with a duplicitous sense of humor.  "When You're Good To Mama" is the number that Queen Latifah does in the tough character of warden Matron Morton who uses reciprocity to gain hold of Roxie and Velma.  Christine Baranski adds feminine intuition and empathy to the role of journalist Mary Sunshine.  And Lucy Liu of Charlie's Angels fame is flexible in a cameo as an avenging socialite who kicks her way into the limelight.

The swift juxtaposing from prison to stage to courtroom has pathos and grandeur as did the manic, Moulin Rouge.  The ubiquitous John C. Reilly, also in Gangs of New York and The Hours, is quietly affecting as Roxie's faithful husband, Amos.  His "Mr. Cellophane" conveys what it means to have someone so close "Walk right by me, and never know I'm There."  And the unfortunate Hungarian woman Hunyak, done by the nearly mute Ekaterina Chtchelkanova, figures in the film's most haunting sequence that moves from stage to a shaken Roxie peering out her window into the cold prison yard.

As Zellweger illuminates the surreal, tumultuous life of Roxie, Chicago resonates as a musical gala with striking spectacles created by Marshall and his crew.  The vivid designs of John Myhre and Colleen Atwood's stunning costuming, are particularly spectacular when Roxie is encircled by mirrors that give her a Marilyn Monroe sparkle.  Under-lit glow captures the inner workings of theater and allows a portal into Roxie's troubled psyche, and the vibrant numbers, from "All That Jazz" to "Nowadays/Hot Honey Rag," along with a creative ventriloquist press conference, confer a joyous, seductive song and dance into the darkly witty side of celebrity worship.