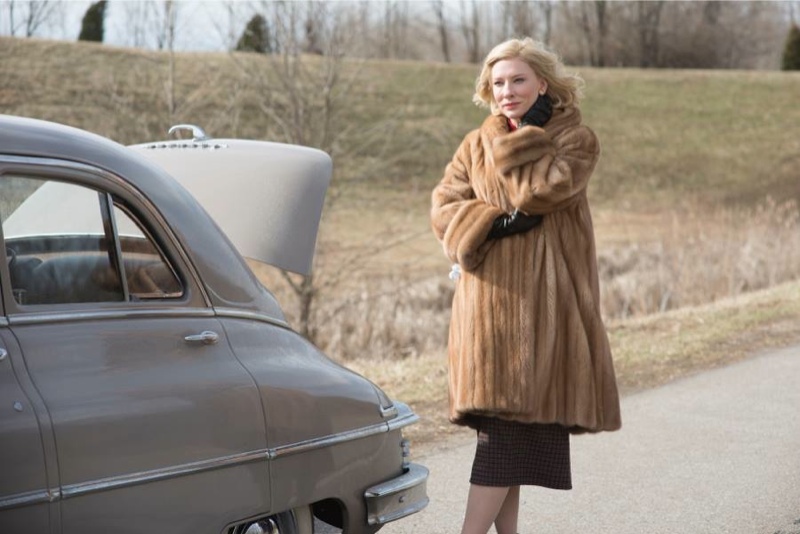 
Another triumph for Todd Haynes (Velvet Goldmine, Safe) in recreating the pre-Eisenhower era during year-end holidays gradually clenches from a condemnatory distaff relationship enhanced by sentient scripting from Phyllis Nagy.

His Carol, from Patricia Highsmith's trailblazing semi-autobiographical The Price of Salt under the nom de plume Claire Morgan exhibits ardor within vulnerability in similarly delicately exquisite ways like his Douglas Shirk-Inspired Far From Heaven (with Julianne Moore, Dennis Quaid and Dennis Haysbert).

Widely-acclaimed Australian thespian Cate Blanchett (Blue Jasmine) and Rooney Mara (whose name is derived from ancestral connections with NFL executives from the Pittsburgh Steelers and New York Giants and has excelled in films by David Fincher and Steven Soderbergh) effortlessly fill Haynes's distinctive gaze with thespian acumen; the kind which is often fondly remembered during awards season . The former in usual exquisitely beautiful, as well as nuanced form is New Jersey housewife Carol Aird and the latter younger shop staffer Therese Believet.

More attractive support in small and large turns comes from Bella Garcia as a daughter and Sarah Paulson (12 Years a Slave, Mud, the controversial small-screen anthology series American Horror Story whose current season subtitled Hotel has her character in an agitated, drug-addled pitch as 'Hypodermic Sally').

A taboo connection develops between the them that leads to a continental excursion after just a whiff of initial attraction with Therese having opportunities with beaus, one of whom is eying the City of Lights (currently in a state of gloom from Jihad terrorists) for them. But Mrs. Aird's preoccupation with her takes on an affectionate presence which is too much to overcome fermenting strong zealousness.

The pressures for Carol and Therese mount with the clash for care of Carol's young daughter Rindy (KK Heim) with her husband (Kyle Chandler). And, the melodrama between a halcyon of love and desire is rendered with subtlety and palpable poignancy to a heartbreaking conclusion.

Haynes gets the period across with considerable impeccability with craft (some returning collaborating) contributors like costume director Sandy Powell, production designer Judy Becker, Carter Burwell on the score and Edward Lachman's lensing. Here are roles that could have been inhabited by the likes of Jean Simmons, Eva Marie Saint, Grace Kelly or Audrey Hepburn back in Hollywood's Golden Age when contrasting carnal principles became an affair to remember.