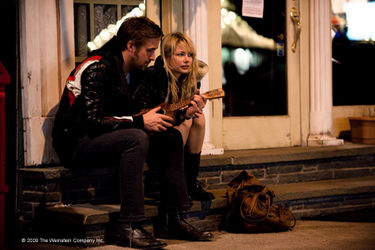 
An unsentimental, gritty depiction of the vicissitudes of modern relationships comes in the form of Derek Cianfrance's Blue Valentine.

Michelle Williams (Brokeback Mountain) and Ryan Gosling (Half Nelson) put their all into married couple Cindy and Dean, in a well-shaded, raw, nonjudgmental non-chronological examination of marital discord. This could be viewed as tough-love couples therapy.

With much detail to the mundane with its joys as it gets more difficult, the main focus underscores the intensity of the performances from the pressures endured by dutiful nurse Cindy (Williams).

In the "present" strand of the narrative partially written by Cianfrance, Gosling's Dean is an underachieving moving man while being a lovely husband and dad to spitfire daughter (Faith Wladyka). There's a chance to make things rectify a dissolution, even if being away for a weekend at a themed hotel comes across like a last-ditch effort.

Crucial to the storyline and characterizations is understanding how these two passionate people are at such a precarious position in their lives. So, the back-and-forth structure takes the viewer on a journey which admirably endears them from their introduction to their wedding. All the light and dark in their bonding, from the playfulness and the anger is done with keen naturalism to understanding the emotions, including the psychological frustrations.

Close-ups and vantage points are used to solid effect as the director works well with his cinematographer whose compositions shift from home to retro spacecraft of a "future room." Also, the film's score has a moody, rhythmic quality than works well off of how Dean's commitment to his family versus Cindy's ambition at the center of the marriage.

For all of the love on the rocks suffused amid everyday blue-collar life, the eponymous meaning of the title is apt, even if one really still tries to wish for more than a bleak outlook. A sad, personal drama is an often revealing story of priorities and desires not of the greeting card variety. Nearly throughout as when Dean sings while on his ukulele and Cindy does a little tap dancing after closing time, Gosling and Williams painfully have us in their emotionally shattering grasp in which a chasm of feelings can just disappear.