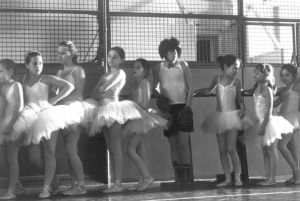 A small picture that won't be seen by nearly as many as the comparably themed The Full Monty and Brassed Off, because it's not strippers or woodwind instruments, it's ballet dancing in Billy Elliot that takes young Jamie Bell to center stage in an energetic, appealing performance of conflict through an identity crisis.

As Bjork's Selma in Dancer in the Dark uses the Hollywood musical to engage her diminishing eyesight and gloomy mundane circumstances, Bell calls upon a desire to dance to transform boxing to ballet lessons and Billy soon gives up his sparring gloves for ballet slippers.

The assured direction of novice Stephen Daldry establishes a visual aesthetic for Billy's personal milieu using the backdrop of a coal miner strike in 1984 in a working class town near Newcastle.

His father Jacky (Gary Lewis) and brother Tony (Jamie Draven) are on strike so times are tough and they live with Billy's Grandma, played with a surreal senility by Jean Heywood who says "I could have been a professional dancer."  Billy is also struggling with the passing of his mother; a kitchen scene with a bottle of milk and a graveyard moment makes him ponder death while in bed.

Billy Elliot has many first timers in its credits, and scenarist Lee Hall may have a perfunctory palette to apply to the canvas, but this comedic drama has a solid relationship at its core that is forged well within the closed in look of the mining village.  Stage and film veteran Julie Walters endows ballet teacher Mrs. Wilkinson with a forcefulness and wistfulness as she pushes Billy to apply to the Royal Ballet School in London.

Daldry frames an older Billy disappearing in the air in slow motion at a gala dance event and uses dark hues of the tense strike with police in riot gear, along with the more broadened dance sequences as contrast, which reflect the like qualities of a struggling miner with a gifted, exuberant dancer who jumps heartily through puberty.