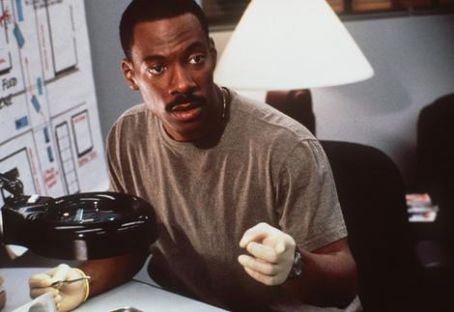 
John and is takes on the task of directing Axel Foley (Eddie Murphy) in his third trip from Detroit to Beverly Hills. Landis has little plot to deal with, his work is simply filled with action. The opening scenes, which provide the motivation for Axel's revenge, are also the best of the action scenes.

To add interest, Landis added a number of celebrities to the film. George Lucas and director John Singleton have bit parts, and Alan Young (Mr. Ed) is Uncle Dave, the owner of an amusement park called WonderWorld. Special effects genius Ray Harryhausen sits in a bar and watches the action, and Bronson Pinchot as Serge is reunited with Axel. Serge lost his gallery job and now sells defense automatic weapons in a boutique. The weapons are perfect for action with Axel.

The bad guys, led by John Saxon, use the amusement park as their headquarters while acting as security guards. Judge Reinhold has a smaller part as the Los Angeles County police jurisdiction coordinator. There is not enough of his comic clumsiness.

Murphy does many of his own stunts and it quite impressive above and below the midway of WonderWorld. The use of Universal Studio's Earthquake set also provides an interesting scene.

Murphy's performance is sharp, but it's action that carries the movie.