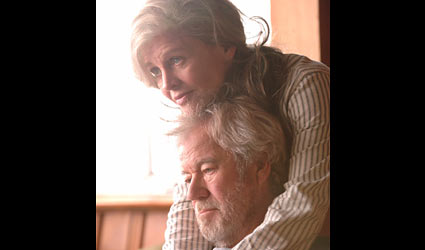 
Some may think this is a glacial, arthouse version of The Notebook, but Sarah Polley's directing debut is something small with much delicacy and heart.

The Canadian-born actress, still shy of her 30th birthday, has been quite engaging in films like Dawn of the Dead and My Life Without Me. But, behind the camera and from the page (from Alice Munro's short story), she knows how to make something unpretentious, unsentimental, and illuminating.

Her wonderful acting leads Julie Christie and Gordon Pinsent play a 45-year married couple Fiona and Grant. They are starting to deal with the fact that Fiona is beginning to show signs of Alzheimer's disease. Grant is troubled over this pragmatic change, though he feels okay by allowing Fiona to take residence in a quality nursing home not far from their country lake house.

Polley's sensitively drawn, poetic picture intelligently invites one into what is happening to Fiona and Grant. She strikes up a relationship with another patient (Michael Murphy). Grant has to deal with the medical establishment, well represented by actresses Wendy Crewson and Kristen Thomson. Also, there happens to be the patient's wife, endowed with brusque vigor by the venerable Olympia Dukakis.

From the understated visages to the wintry environment, the rich filmmaking and unhurried narrative has much to say about how and why people act the way they do. Christie has quite a part in the twilight of her career and makes Fiona's inner metamorphosis something to behold. It helps that she has quite a significant rapport with Pinsent, who proudfully anchors the proceedings.

In Away From Her, the saturnine comes in an emotive way that doesn't dampen down what's really going on around Fiona. The beautiful nursing home has a lot to offer, especially from such a capable staff. Polley lets the personalities approach the everyday in amusing, sweet, and intimate ways, as lives become complicated. From the imagery to the characters, it is hard to let something this attentive and shattering drift away from so many who have yet to fear forgetting those they love most.