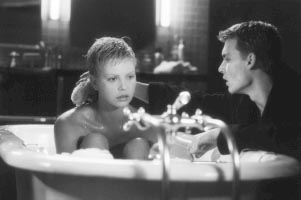 Ravich performs when it comes to style, but the story about a young couple, Spencer Armacost (Johnny Depp) and Jillian (Charlize Theron), the astronaut and his wife promises much and delivers very little.  Deeply in love they share an idealistic life together, she teaches and he goes into space.  Her sister Nan (Clea DuVall) considers her to be very fortunate to have such a relationship.  She finds men to be like parking spaces, "the good ones are taken and the others are handicapped".  The perfect relationship changes when Spencer return to Earth after an unexplained two minute event in space.  All the warnings lead us to the conclusion that Spencer is no longer Spencer.  The heart of the film delves into the terror faced by the astronaut's wife, as she questions her husband's changed character and the two heart beats that tell her she will give birth to twins.  The climax and ending have been used before and they are not worthy of the innovative compelling images which are presented.

The elegance of the images is impressive; the shadow Jillian casts across the blue sky from a gleaming polished room at NASA headquarters as she waits to see if her husband will return to Earth alive, is symbolic of everything being clear and crisp.  A visually safe place filled with warmth and security until the return party for the Astronauts.  At that point a sense of chaos fills the dance floor and the party is filled with free association.  Cameras flow down from the sky and up from the dance floor and there is an obvious change in aura which predicts danger to come.  The opulence of the apartment in New York and the daring love making in Grand Central Station which suddenly ends at home in bed are splendid images and interesting to watch.

The film, however, with its powerful performances and visual enticement lead us to expect more than it delivers.  It's like a 350 horse power engine with all the bells and whistles that has a top speed of 30 miles per hour.

We see old radios that send messages, death of the other Astronaut, a suicide, twins of danger, Blair Brown as an executive's wife, Samantha Eggar as the doctor who discovers the two heart beats and Jillian frozen in time as her students move around her in a hall way, all leading to a standard science fiction ending.  It promises much and delivers very little.

The style is exciting but the screenplay whimpers out.