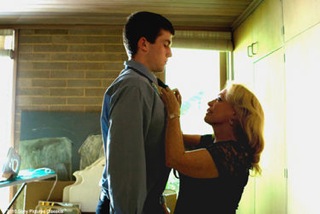 
This hard-hitting, occasionally visceral Australian import is a chilling crime-drama with a dysfunctional clan at its center.

The sensible script from tyro helmer David Michod has its harsh, hornier aspects as it centers on sullen teen Josh or J Cody (newcomer James Frecheville) dealing with the heroin overdose of his mother.

An impressionable J is taken in by his affectionate grandmother Smurf (Weaver) and his uncles - a handsome Barry "Baz" Brown (Edgerton) and a menacing Pope Cody (Mendelsohn) who aren't on the right side of the law.

With assured pacing, Michod tautly sets up an edgy dynamic where low-life thugs, renegade cops and one better one intersect. The idea of doing better through securities than being an armed version of Bernie Madoff is revealed through Baz Brown who finds out the hard way that going clean doesn't mean "g'day."

Then Animal Kingdom, with its strong characterizations, physically and mentally simmers from a vile Pope's retribution and its ramifications. Also, Pearce's veteran, straight-laced moustached cop Nathan Leckie has his work cut out for him when it comes to J to confide in him about his uncles, playing out like a chess match of sorts.

This potent policier has some addling, asphyxiating moments and ironic power from a line like "we'll treat you like family." From the voice-overs to the lensing by Adam Arkapaw which sense a colder, gritty side to the country's second-largest metropolis, a mesmerizing, intellectual quality distinguishes itself.

Supporting characters include impassive, metrosexual type Darren (Ford) wanting out but seemingly useless without his family, as well as Laura Wheelwright as J's druggie bimbo of a girlfriend, Nicky. Pearce is solid in a familiar, less showy part than L.A. Confidential concerned and cognizant of integrity and being loyal to one's blood, while Weaver and Mendelsohn really let loose with nuanced turns, highlighted with malevolence, one like a Lady MacBeth, the other vengeance on the lam. Finally, one is left with assured, steely look which exudes professionalism and viciousness beyond some lip service.