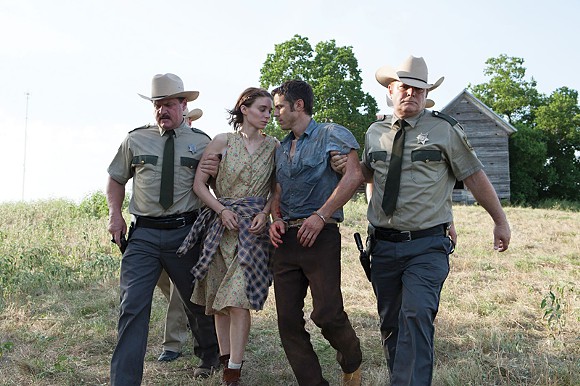 
A hazy and obtrusive, if lyrical Meridian Texas-set crime drama is touchable at least in the visual sense of the word from the compositional skill of lenser Bradford Young as it speaks of fated love proving that helmer David Lowery in his second feature has much potential and style to burn.

For some the sound editing may have an impact on Ain't Them Bodies Saints (cobbled from a folk tune) starring Rooney Mara, Casey Affleck and Ben Foster that has an air of pretension about it in a tale perhaps inspired by  Terrence Malick's seminal Badlands.

A somber Affleck and an angular Mara may have more petulant poses here than in films like The Killer Inside Me and The Girl With The Dragon Tattoo (2011) as their petty criminals Bob and girlfriend Ruth are forever changed after a shoot-out at a small-town Texas farmhouse where they fled after a robbery.

Unbeknownst to a deputy, a subdued Foster, wounded during the gunfire (which killed the couple's unknown partner), Bob assumes responsibility for Ruth who will raise their daughter Sylvie on her own while receiving love letters before he escapes. Meanwhile, Patrick (the deputy) develops  a sense of attachment to Ruth and her young daughter as she is provided sanctuary by an older proprietor Skerritt (a reliable Keith Carradine) who almost acts like a surrogate father. Nate Parker's Sweetie is the bartender who keeps Bob under wraps as he heads towards Skerritt's general  store.

A dry tale more successful with its images thrives on being measured and obfuscated when it comes to Patrick's suitor ways around Ruth as well as the subterfuge of desperadoes intent on stopping Bob's impulse to return to his family which may be connected to Skerritt whose son possibly met his demise in that first reel. It would explain some of the key narrative cues, but Lowery is obviously more attuned to fitting the prose to the very homey atmosphere so technically fashioned. Affleck, Mara, and Foster aren't really that hampered by the approach but familiarity to the references, as one could deduce the time frame based on artifacts, doesn't necessarily yield high-toned purposeful cinematic poetry.