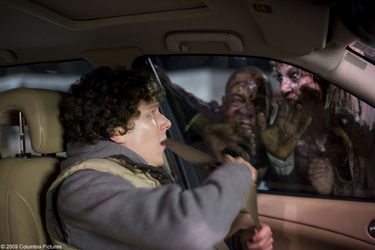 
Here's some escapist entertainment for those into a slight, rather rabid horror (or zombie) comedy.

Zombieland stars Woody Harrelson, Jesse Eisenberg, Emma Stone and Abigail Breslin, and has a witty B-movie vibe going for it. It's more splatstick than clever send-up like the absurdly amusing Shaun of the Dead, but still is often rapid-fire sanguine entertainment even as it recalls the Ghostbusters theme.

Instead of giving recognition to the hard-working visual and make-up (prosthetic) design folks, special mention should be made to the casting by John Papsidera. Having the varying acting styles of Harrelson (Management) and Eisenberg (Adventureland) in a film that really gets going after the opening reel turns out to wise choice even when even the story gets more scatterbrained than really funny.

Of course, the lethal virus has put the planet in an undead post-apocalyptic state as the lurid, somewhat audacious opening has a geeky neurotic late adolescent (Eisenberg) explaining some advice for survival. A recollection to such ravenous eaters comes in the form of really alluring damsel of a neighbor 406 (Amber Heard of The Informers) lifted him from privacy until being too hot for him the next morning.

The storyline from the team of Rhett Reese and Paul Wernick is more sketchy and hardly situational with some wry improvisational dialogue as a vehicle-less survivor now hitches a ride with Harrelson's goofy armed road warrior who calls himself Tallahassee (in order to stay more emotionally distant). Tallahassee calls the dithering fellow Columbus as he hopes his parents are still around in his native Ohio. Thus, the goofy proceedings earns its zany glee from this mismatched pair who find camraderie and redemption where zombies are rampant.

Cautious Columbus and tenaciously attack-minded Tallahassee are stopped at gunpoint by two sisters, older teen Wichita (Stone of Superbad) and Little Rock (Breslin of Definitely, Maybe). It doesn't take long to realize they need to be on the same side and Columbus starts to have feelings for Wichita while Tallahassee becomes paternally fond of Little Rock.

Zombieland moves from Texas out to Southern California, finally settling at the mansion of a well-known Hollywood celebrity (whose initials are BM having a lengthy cameo) with the notions of a theme-park outside of L.A. being sans zombies (a nice inside joke). If a fine Breslin (My Sister's Keeper) and Stone are short-changed in this slick escapade; they let the heavy lifting go to the smart pairing of Harrelson and Eisenberg in this over-the-top gorefest directed with verve by neophyte Ruben Fleischer.