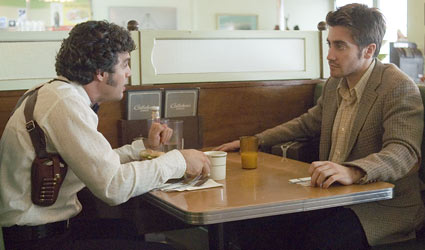 
Zodiac suffers from one problem and it is not its significant length. The ending for a script that is based on real occurrences isn't always as smooth or potentially satisfying as a nice clean Hollywood ending. Zodiac has one of those endings that works and gives us answers but not as clean as many audiences would like. It is however a great long journey of discovery for Robert Graysmith (Jake Gyllenhaal) and for those who enjoy a good murder mystery that is not easy to solve.

Beginning in a place filled with memories of the seventies two lovers parked in a Corvair are shot to death. Next we are introduced to metal desks and typewriters at the San Francisco Chronicle and the innocent staring eyes of Gyllenhall's Graysmith, the paper's cartoonist. He sees a pattern in the letter codes from the Zodiac killer as the story of a July 4th murder in Vallejo is the lead story. The killer has taped a light to his gun to make it easier to kill at night as the music from the seventies fills the sound track. Zodiac calls in his murder of a couple on a beach and a taxi driver as the first two cops assigned to the case, Inspector David Toschi (Mark Ruffalo) and Inspector William Armstrong (Anthony Edwards) get into the case. They will be the first of many with only Toschi staying to the end. While Toschi consumes animal crackers and Melvin Belli (Brian Cox) spreads BS around we realize what a difference cell phones could have made for some of the victims of this serial killer.

Robert Downey's reporter Paul Avery becomes the focal point on the case but that does not limit his consumption of booze and his love of cigarettes which drag him down over time. As Avery begins to become famous for his articles on Zodiac, buttons appear with the slogan "I am not AVERY," and the killer wants his symbol to appear in articles about the murders. References to the 1932 film The Most Dangerous Game with Joel McCrea, Fay Wray and Leslie Banks pop up along with Dirty Harry references but the crimes avoid solution as we see time passing through time laps photography on the construction of a new building.

As the years pass Graysmith becomes more and more obsessed with the solution even as Inspector Armstrong leaves his assignment to spend more time at home and Graysmith is called an eagle-scout because he acts like one and is one. His obsession begins to weigh heavily on his wife and he even finds himself in a basement which he should not have entered. Downey's Avery at a new job spends his time in a bar carrying his oxygen having given up on the many leads and dead ends which have not proven who the killer is.

The investigation and the chase are the heart of the film and for those of us who enjoy the trip more than the conclusion this is the ticket. Filled with tension but cut with humor we see how it effects the characters involved in the investigation, their life and how it adds up because Robert Graysmith would not quit even when it took more than twenty years to reach a conclusion.