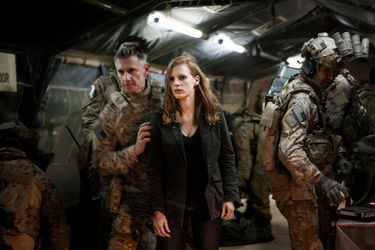 
This new muscular, thoughtful thriller from Kathryn Bigelow and scenarist Mark Boal deeply delves into what lead up to and including the demise of the most hated and feared Al Qaeda mastermind, Osama Bin Laden, in Abbattabad, Pakistan.

Zero Dark Thirty (referenced by the state of darkness at 12:30 am) is more of an ensemble procedural than their more action-oriented, leaner acclaimed Iraqi War picture, The Hurt Locker. Both exude a deliberate, composed brand of filmmaking in an attempt to fulfill a dangerous mission at least including a barrage of gunfire and explosions. Though not in a way accustomed to mainstream audiences similar to how they subvert genre conventions.

Boal's credible way through "first hand accounts of actual events" (by his closeness to the one apparently most dedicated to the mission) keeps it all apolitical and nonpartisan over nearly a decade where an aural rush of 9/11 calls first permeate from a blackened screen for what seems like an interminable amount of time.

The focus of a film that probably won't play well to Skyfall or Bourne Legacy fans is the firebrand empowerment of CIA agent Maya (Jessica Chastain of Lawless and an existential The Tree of Life as well as The Help) with more inner than external strength. Her indefatigable advice to those often unwilling to take her seriously led to a Navy Seal operation approved by the director and ultimately the U.S. Commander-In-Chief bearing down on a compound near a Pakistani military holdup.

Early on in a film that may call to mind penetrating films from the likes of Alan J. Pakula and David Fincher there is animalistic (dog-collar, water-boarding) torture (before a broadcasting insistent against the vile practice by Pres. Obama) of a closed-mouth terrorist suspect (Reda Kateb) by Maya's colleague Dan (Jason Clarke) that makes her turn away. The sequence builds to Maya's influence on the prisoner in a way that goes against how he needs her distaff side to get out the situation.

For the much of the film there is a fair share of consultation as Maya deals with colleagues (as played by Harold Perrineau and a voluble Jennifer Ehle as well as a crafty Clarke) and among higher-ups (done by James Gandolfini of Killing Them Softly and Mark Strong). The complications and obstacles in all of its obliqueness is palpable as Maya barely escapes what one of her friends in the government organization doesn't which leads her to more Intel and a needle in a haystack that is a courier.

Bigelow works persuasively with an estimable production crew, including the down-lit lensing of Greig Fraser (mostly in Jordan and India with one explosive moment shot in London) and the mostly dampened-down score of the creative Alexandre Desplat until the backstory finally gives way to an Act of Valor fearful, fitfully thrilling latter-going.

There are the night-vision apparatus and probable cameras connected to those a part of the dangerous dynamite-infused campaign across the Afghan border linked most likely to a White House conference room as some viewers will be reminded of Cloverfield and The Blair Witch Project. What is revealed around the climax and denouement may not be the kind of cleansing catharsis from what was considered a major victory in the current administration's first years in office.

At times the gritty realism of a not so emotionally engaging Zero Dark Thirty makes plenty of noise even with a silencer on a chopper's rotary blades in the honing of a target. But, with the resolute, vivid commitment of Chastain leading the way (with Chris Pratt and Joel Edgerton as two of the commending Seals), Bigelow, Boal and her crew have fashioned an atmospheric, atypically complex tale that definitely like the title of the regarded best-selling book of the assassination was "No Easy Day."