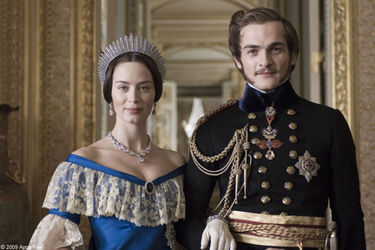 
This finely appointed British drama is definitely tailored for the Masterpiece Theatre crowd as an introduction to what may pique some curiosity into the country's royal history.

Rising thespian Blunt (Sunshine Cleaning) plays the title character at age 18. Breaking free from her mother (Richardson of Harry Potter and the Goblet of Fire) and her regent (Strong of Sherlock Holmes), she has to pave way for an heir to the throne.

As directed by Jean-Marc Vallee and scripted with some panache by Julian Fellowes (writer of Gosford Park and director of the little-seen sometimes sharp drama Separate Lies) Victoria has much pressure on the way to the life she really wants. Really taking hold of things means she has to be a bit saucy besides her normal petulance. On the way to true love, there are those like Bettany's spunky Lord Melbourne, as well as Belgium's brooding Prince Albert (Friend of The Boy in the Striped Pajamas).

For those who like costume dramas like Brideshead Revisited and The Duchess, there is much to appreciate in this construct of a romantic comedy. Its wry insightfulness often counters a kind of assured earnestness that sets the mood as Victoria becomes empowered with a loyal, right-hand man beside her.

While the story may not be as eventful like a Marie Antoinette, it seems to have a glint and steeliness about it that is in sync with such grand, ornate production values, from the lensing and design to the costumes and jewelry. Blunt brings a certain bravado to the role and is good opposite the love-struck Prince, settling into the role with a bit of soulfulness. Whereas Bettany and Strong instill some grit into their detailed characterizations, the real scene-stealing comes from Richardson with an imperiousness and Jim Broadbent (The Damned United) as ailing, yet mad King William IV.

One of the holiday's more pristine arthouse offerings, The Young Victoria may have its devotees yearning for more, as the storyline and its conflict a bit diffuse, but rather exquisitely threaded as a light, if intriguing biopic.