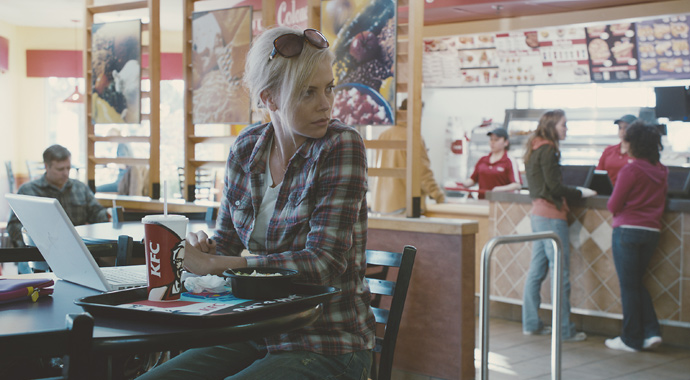 Young Adult also includes Patrick Wilson, Patrick Oswalt, and Elizabeth Reaser, and looks to be more of a marketing challenge for its distributor as it appears to have the qualities of pictures like the recent Bad Teacher, Never Been Kissed and The Opposite of Sex.

At the outset, Theron's young adult author 37-year-old Mavis Gary is more than disheveled, prone and inebriated in bed with a big reality television star getting more airplay. High School was good for Mavis who seemed to move on to greener pastures, but never matured. So, Reitman (who also directed Up In The Air) brings some ironic sensibility to Cody's wry, yet not too involving script where it concerns Mavis being Mavis while trying to benefit from her past small town personal success.

For a while, some of the gags penned by Cody hit with the type of abrasive humor that lets a character like Mavis dominate, and Theron endows her with enough narcissistic, oblivious moxie to go around and then some. A liberal libidinous stride brings Mavis after her ex-boyfriend, now married Brian (Wilson), while knocking down old, handicapped classmate Matt (Oswalt) known as the "hate crime guy."

The filmmaking works off the anti-heroine's seraphic visage and shrewdness as she settles back nicely into her "glory days." Theron always keeps Young Adults more watchable than expected for someone this pleasant as Cameron Diaz, Drew Barrymore, and Christina Ricci did in the aforementioned, if disparate films. Yet, the approach by Reitman (not that dissimilar from Juno) doesn't connect with a similar satisfying effect here from more sympathetic nuance to such an unpleasant, regretful individual.

From its tighter studio reigns of which Theron, Reitman and Cody contributed, the inchoate final product is still well-appointed and acted with the kind of quality Reitman is able to manage for those like Elizabeth Reaser as Brian's misses. Oswalt (who has excelled in smaller productions like Big Fan),in particular, holds his own opposite Theron in a relationship that changes not necessarily because of the tact taken on Mavis. In the end, what is acerbic and amusing never attains the kind of canny mix of subtlety and emotion from binges and dwelling in the past.