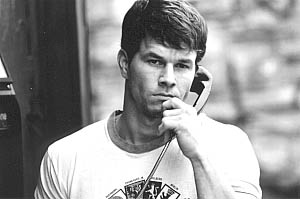 Mark Wahlberg plays Leo Handler as he returns home after a stay in prison with the hope of getting his life back on track.  When a convict returns home he runs into the same people who's association got him imprisoned in the first place.  Unwittingly, Leo is drawn back into the troubled corrupt world of construction and repair for the New York City subway system.  His Uncle through marriage, Frank (James Caan), can't or won't put him on the family construction company payroll and he begins to help his longtime friend, Willie Guitierrez (Joaquin Phoenix), with enforcement jobs contracted from the company.  When it goes bad, everyone is in danger of being caught by the law and Leo becomes expendable.

The Yards is remarkably like John Shea's best picture winner at the Seattle International Film Festival, Southie.  Even more intriguing is that the lead in Southie is played by Donnie Wahlberg.  Each of their characters return to their roots: Donnie to South Boston and Mark to NYC.  Each have run in's with corrupt figures, can't find work, have a mother with a bad heart and at some point face a decision regarding the corrupting forces in their community.  Southie is somewhat more gritty and real but can't compare with the star power of The Yards.

The Yards is filled with seasoned performers, beginning with Faye Dunaway as Leo's aunt, Kitty and Ellen Burstyn as Val, Leo's mother.  James Caan fits beautifully as the family man who has built a thriving business by using bribes to secure contracts.  Joaquin Phoenix shows another remarkable side as a tough kid who is aware that his girlfriend Erica (Charlize Theron) prefers Wahlberg's Leo as a lover.  Even Steve Lawrence's political Arthur Mydanick fits like a glove as the king pin in his borough.

The dark shadowed scenes and the constantly building tension on the characters demand attention and sympathy for the flawed but not totally corrupt family that plays in the grim world of politics and money.

Leo's journey is reminiscent of the so called "good kids" portrayed in the thirties who were forced by circumstance to make a mistake and fall into crime.  They were sympathetic characters like Leo, who just wants to get clean and live his life.  To get that opportunity and to help support his mother, he finds himself in the wrong place at the wrong time and the cascading result pits him against everyone he knows and loves.

The Yards holds interest even when predictable but fails to rise to the level of power and intrigue that other dark films have attained.